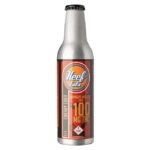 Keef Cola produces the most ridiculously delicious cannabis infused drinkables you will ever have the pleasure of pouring into your mouth. Besides being a tasty way to take your meds, each bottle of Keef Cola also provides you with vitamin C, B3, B6, B12. Keef Colas contain either 10 mg (rec) or 100 mg (med) THC. If you have never tried drinkable cannabis before, there is no better way than this!

Drinkables are an excellent way to get your cannabis intake. Your system will begin to absorb the precious cannabinoids quite rapidly in their liquid form, with full onset possible within 30 minutes. Unfortunately, many of the drinkable THC infused products out there taste more like cold medicine than an enjoyable beverage.

Keef Cola changed all that by introducing their line of Medical and Recreational cannabis infused beverages, focusing equally on the taste as well as the high. The result is an infused beverage that is both deliciously refreshing and potent as hell.

I had tried some of the other big flavors like Bubba Kush Root Beer, Blue Raspberry, Purple Passion, and Orange Kush, but this was my first time finding the Cherry Cola. I consumed the 100mg bottle after a light breakfast to prepare for my day.

The icy cold cola was crisp and refreshing with just the right amount of cherry for me. I desperately searched for the hashy taste but it was so barely noticeable that I may have imagined it. To me this is a better tasting cherry cola that either of the Top 2, which makes it dangerous!

I could feel the effects come on strong after about 30 minutes. It was a beautiful well-balanced high that was probably suitable for any type of day I had. I was clearheaded and focused, blanketed with a field of calming energy. Not the sleepy kind, mind you, just a nice peaceful, mellow vibe that lasted for about 6 hours before fading away,

Keef cola Cherry Cola was an awesome product to review. Like the other fine offerings from Keef Cola, I was certainly not disappointed by the taste or the effects. If you are a fan of cherry cola, you should try this out – I bet you will like it.

If Cherry cola is not your thing don’t worry, there are 7 other flavors of Keef Cola, so I think you will find one you like. My favorite is the Bubba Kush Root Beer, what’s yours?