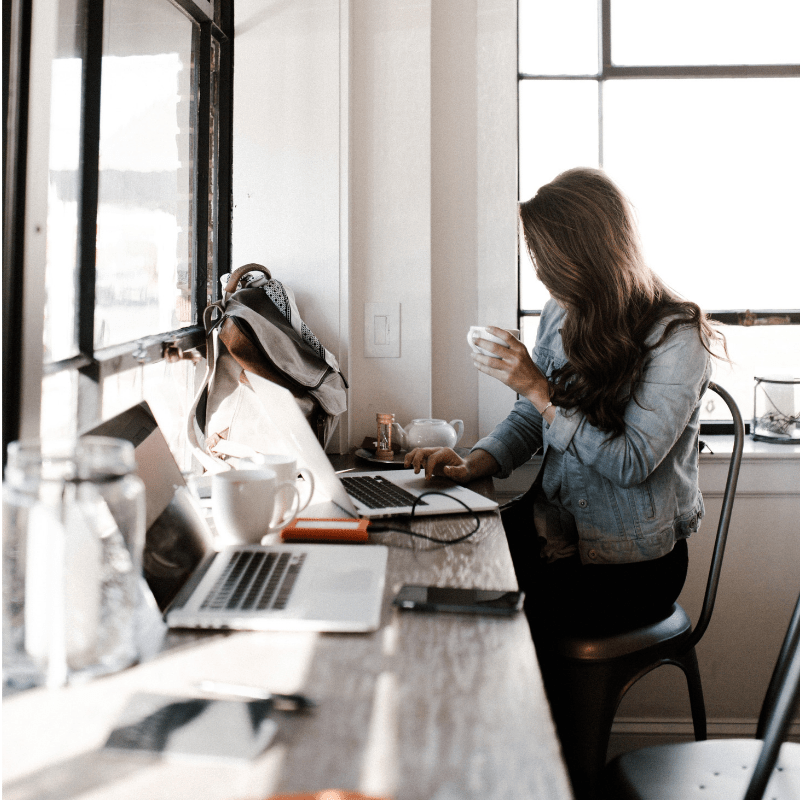 Five years ago I was graduating college: excited, motivated, proud, and full of ambition. I knew (or thought I knew) exactly what I was going to do with my life post-grad. I had a job lined up that I knew was only a stepping stone, but was excited about it nonetheless. It ended up being a great gig: a smart move to start my career in marketing. I wore many hats in that role which ultimately positioned me as a well-rounded marketer from the outset. In hindsight, it was one of the only positions I held in those five years that didn’t make me a neurotic ball of anxiety.

My career pursuits in the following years were similar: wear lots of hats, get as much experience as you can. Then, once I built up what my colleagues called a ‘high-demand’ skill set, I added another self-imposed criterion to my ceaseless job hunt: make lots of money. And I became obsessed with it. Even though my 9-5 life only lasted five years, it seems like I was always looking for a new, better gig in one way or another. What constituted “better”? For me, money and prestige (AKA a fancy title). But mostly money.

Up until 2018, I’d always been super money-oriented. I was taught from a young age that if I wanted something, I had to work for it. So, to me, money meant that I could live the glamorous life I wanted. The nice apartment decorated to the nines in the hip neighbourhood. The multi-city trips across the globe. More disposable income than I knew what to do with.

I went for whatever job had the best salary and forgot about work / life balance or company culture or anything else that didn’t revolve around monetary gain or maintaining the image of myself I wanted others to see. I took extended holiday time to go on big trips. I drank a lot. I was obsessed with one-upping myself and others on the “Things I’ve Been Able To Afford in My Early 20s” scale. I was the very definition of a yuppie, self-absorbed millennial (at my core I still am exactly that, but I’m working on being less insufferable about it!)

Sound glamorous? Maybe. Big surprise though: it wasn’t. Not at all. Furthest from. Despite the fleeting moments of joy when I would escape work to travel, I was miserable. Anxious. Paranoid, deeply neurotic, delusional, you name it. And it showed.

Going to the pub after work everyday to wash off the day, and ordering takeout 3x a week because I didn’t have the energy to cook took its toll. My meticulously decorated apartment was a big mess most of the time. My self-care and personal upkeep often fell by the wayside. I made a ton of questionable decisions that I look back on and am amazed I got out of scot-free.

I dragged – literally dragged, myself out of bed every morning to go to the job that terrified me most of the time (though I never dared say that out loud) and started every morning with a coffee, a cigarette and an anxiety attack. Some people would tell you this is just the nature of working in advertising. To those people I say you need to check yourself.

That was my life from about 19 – 23: get the job, do OK for a while, start to lose my marbles, leave the job, take a stress leave, repeat. The last straw was eventually getting laid off from what I and anyone else in my industry would have considered the “dream job” in 2017. Losing that job was pretty shit, but I saw it coming. More than anything I was relieved because it meant I didn’t have to fake being a high-functioning human anymore (I was barely functioning at all at the time) – let alone be the composed, disciplined, high-energy, ‘yes’ person you’re expected to be when you work in an advertising agency.

So I took some time off again. Moved back in with my parents for a few months (which I realize is a massive luxury not everyone has, for which I’m very grateful). I started freelancing again. I got real clear on what I wanted with the help of my spiritual practice. I realized I desperately needed to change my priorities, and that I needed to stop putting my health on the back burner. I also felt a massive urge to change my environment. So, that’s exactly what I did. I got myself an Italian passport (best thing I ever did, thanks Dad!) and within 6 months I found myself on a one-way flight from Winnipeg to London Gatwick.

I’m 25 now, living in Southwest England with my partner. I started prioritizing enjoying my life over money. I stopped giving a shit about the “prestige” of what I’m doing for work, because in the words of Chuck Palahniuk, you’re not your fucking khakis. For now, I’m a freelance digital marketer and work a part-time gig in a dementia care home as an activities & wellness facilitator.

It’s the perfect mix: I still do the work I was trained for and that I’m good at, but on my own terms – and the rest of the time I spend my days making a meaningful impact on peoples’ lives. I still travel a lot, only now it’s a lot cheaper to do so because I live in Europe where amazing places like France, Italy and Spain are right next door.

I’m a lot more intentional about my money – and even though I have less, I feel richer than I ever have. I will likely never work in a traditional 9-5 again, which is fine because companies are finally waking up to the fact that set office hours no longer make sense and if you let your employees manage their time in a way that works for them, they’ll produce much better work.

I have a pretty unconventional career now. But it’s one that makes me happy, makes me feel free, and ultimately, doesn’t stress me out. That’s not something I was ever able to say before.

So, if you’re thinking of re-evaluating your own career, trust that you have options besides the corporate rat race. The internet has made working remotely easier than it’s ever been, and we have more ways to make money at our fingertips than ever before. Your pipe dream is in closer reach than you think: you just need to take the first step.

I still have a lot of lessons to learn, and, undoubtedly, many more career shifts to go through. But if there’s anything I’ve learned so far, it’s that dolla bills ain’t gonna hold you when you’re sobbing in bed at 3am because your life is a dumpster fire.