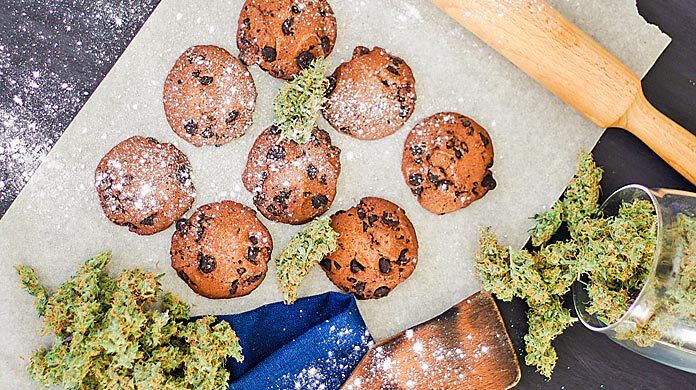 As cannabis is legalized in states like California and Colorado, consumption has gone mainstream.

Coca-Cola has even bought into the industry, ready to capitalize on the growing trend of edibles, or cannabis consumed through eating or drinking.

Once the hallmark of counterculture in the 1960s and ‘70s, marijuana no longer carries the reputation it once did. Today, weed is available almost anywhere, whether it’s legal or not, and everyone from teenagers to the elderly are indulging, many citing health benefits over attaining a certain high. It was only a matter of time until cannabis made its way onto the culinary scene.

The Transition from Hippie to Haute

As of this writing, over half of the United States will have legalized medicinal marijuana, with eight states legalizing it recreationally too. The vast majority of people in the country, according to numerous polls, consider it safe and believe in legalization nationwide.”

How did this come to be? The same article argues that because cannabis isn’t illegal the way that it used to be, it has been able to seamlessly infiltrate popular culture and become “a perfectly normal lifestyle accessory,” noting that “pot cafes” have been popping up across the country and that even big box chains like Jack-in-the-Box have begun to cater directly to pot smokers with the munchies.

“Though I hadn’t thought about it before, the concept of cannabis-infused vermouth made perfect sense,” Jackie Bryant wrote for Prohbtd after spotting a bottle of vermouth with a clump of green marijuana at the bottom.

“Vermouth is a fortified and aromatized white wine, which means that after the fermentation, another alcohol—usually brandy—is added, and the resulting elixir is infused with various aromatic herbs, spices, barks, roots, seeds and flowers. Knowing that roster, it’s easy to see how cannabis fits in as a possible aromatizing option when making vermouth.”

Like Bryant’s adventures with vermouth, marijuana on the open market makes food and drink possibilities endless. As Variety notes in its coverage of an LA-based chef serving plant-based dishes with weed infusions, “Marijuana-infused fare is not for hippies anymore, as foodies get high and heal.”

The experience is designed to not only get guests high, but introduce them to the medicinal side of marijuana through food as well.

The Cons: There are Still Risks Involved

As exciting these new food and drink developments are to some, infusing cannabis into food can still carry some risks, like special gummies or brownies finding their way into the mouths of pets and children.

In Washington, veterinary visits for dogs who have ingested marijuana in some form have been amounting to almost one per day, as toxicity hovers around three grams of ingredient THC per kilogram of weight.

For children, consequences can be worse. As Poison Control explains, emergency room visits have been increasing among Colorado children who have ingested medical marijuana, often in the form of cakes, cookies or candy.

“The most common symptoms were excessive sleepiness, dizziness, and trouble walking. However, a few became too sleepy and their breathing slowed down. That could mean the child doesn’t get enough oxygen,” Poison Control notes, adding that all of the children survived without permanent issues.

Much like alcohol, consuming marijuana should be done so responsibly by adults who understand any potential consequences. And as more chefs and producers are given more free reign to experiment with taste, aromas, and food pairings, it seems like there will be plenty to taste for years to come.