There has been a major new partnership formed in the pharmaceutical industry, according to a newly filed binding letter of intent. American-owned cannabis producer Tilray will form a strategic alliance with Sandoz Canada, an affiliate of Sandoz International, the arm of Novartis Group that produces generic pharmaceutical products.

This won’t be a limited partnership, either, as the two entities plan to collaborate on “all key business, supply, legal, marketing and sales aspects of the proposed alliance.”

Isabelle Troïtzky, a spokesperson for Sandoz, spoke with in-Pharma to shed light on the new joint project.

“Once the alliance is in effect, initially, Tilray capsules and ingestible oil products will be offered for sale under doctor’s authorization directly to patients in Canada via mail order,” explained Troïtzky.

Right now, medical marijuana patients in Canada can only obtain cannabis products through mail-order from a licensed producer. Tilray, an affiliate of Privateer Holdings, is likely banking on future regulation changes to allow for dispensing at pharmacies as well.

Novartis won’t be the only major pharmaceutical player to diversify their portfolio by getting involved with cannabinoid-focused properties like Tilray. 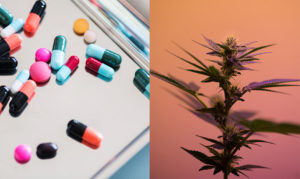 Big Pharma joining the cannabis industry instead of fighting it.

Opioid manufacturers have been entering the industry instead of fighting it. Corporations like Noramco, who was awarded two U.S. patents covering CBD and THC production, and synthetic cannabinoid maker Insys Therapeutics have both been involved in developing medical marijuana solutions.

Noramco, who has some experience with cannabis as the manufacturer of synthetic cannabinoid medication dronabinol, received patents to manufacture both CBD and THC-based products for clinical and pharmaceutical use.0327

Insys Therapeutics, the maker of a synthetic CBD oral medication that is currently in clinical trials, is also one of the most prominent manufacturers of fentanyl products in the world. Their Subsys fentanyl oral spray is at the center of a bribery scandal currently, as the company was allegedly paying doctors in New York exorbitant kickbacks to ramp up prescriptions of the deadly drug. Five doctors have been charged and Insys CEO John Kapoor and other top company executives have been indicted for their alleged involvement.

Sandoz’s parent-company Novartis has had its fair share of controversy surrounding the opioid epidemic as well.

In 2012, Novartis was embroiled in controversy when it was discovered the company neglectfully packaged prescription opioid painkillers in boxes of over-the-counter medications like Excedrin, NoDoz, and Gas-X. More than 1,600 batches of the non-prescription drugs boxed at a Lincoln, Nebraska factory that also produces dangerous and addictive opioid pharmaceuticals were recalled by the company.

The potentially fatal mistake was discovered by the Food and Drug Administration during an inspection when they found a malfunctioning element of the manufacturing process. The pills had been getting stuck and carried over into packaging for other medications.

Additionally, federal prosecutors alleged last year that Novartis was deceitful in its claims that it held nearly 80,000 “educational events” for doctors. While the company claimed it was inviting doctors from around the country to speaking engagements they said were purely educational, the government believes the “sham” events, as they call it, were merely kickbacks in nature — opportunities to treat physicians who were prescribing Novartis drugs to luxurious trips.

This month, prosecutors said they have Novartis sales reps who will testify that they were “essentially buying scripts” by lining the pockets of doctors around the nation. The government also says it has evidence doctors were paid to speak at events that never actually occurred.

Novartis, for their part, “disagrees with the government’s characterization of our conduct and continues to dispute the allegations concerning certain speaker programs.”

While some pharma companies have proved corrupt in the past, it may be imperative to include them in the progression of medical marijuana research. Between vast funds dedicated to finding new therapeutic solutions and the scientific minds to conduct new-age research, these companies could speed up the process quite a bit.

In a monumental medical marijuana summit at Harvard Medical School, Dr. Raphael Mechoulam, the founding father of cannabis research and the man who isolated cannabinoids for the first time, explained how pharmaceutical companies could help bring cannabis out of the shadows.

“People express themselves and say, we want this to be done, it can be done,” said Dr. Mechoulam. “It is complicated. It will cost money. It will take time, but it can be done.”

“I thought that as soon as we know the chemistry and the pharmacology and then the toxicity, and if there are any positive effects, companies will go in and take compounds and go ahead with clinical trials, which is true for a huge, huge number of drugs.”

$1.99 (as of April 8, 2020 - More infoProduct prices and availability are accurate as of the date/time indicated and are subject to change. Any price and availability information displayed on [relevant Amazon Site(s), as applicable] at the time of purchase will apply to the purchase of this product.)

$0.00
Talk to Tom and Ben: See them take turns to repeat... read more
(as of April 8, 2020 - More infoProduct prices and availability are accurate as of the date/time indicated and are subject to change. Any price and availability information displayed on [relevant Amazon Site(s), as applicable] at the time of purchase will apply to the purchase of this product.)

$0.00
Watch Fox News Channel live 24x7 without a cable b... read more
(as of April 8, 2020 - More infoProduct prices and availability are accurate as of the date/time indicated and are subject to change. Any price and availability information displayed on [relevant Amazon Site(s), as applicable] at the time of purchase will apply to the purchase of this product.)