While 15 percent growth is enviable for any industry, it represents a slowed-down rate of expansion in Colorado, which last year saw growth of 31 percent.

But that doesn’t mean growth is slowing down across the board. Instead of hunting for growth across the entire industry, it makes more sense to interrogate the industry’s many smaller markets for areas of rapid expansion.

One key point: Flower last year represented 49 percent of the market, but in terms of dollars it experienced relatively weak growth of 2.6 percent. Volume rose by 24 percent, but the price for flower keeps dropping — the average price for a gram last year was $5.13, compared to $6.20 in 2016. The inevitable growth retreat in flower significantly impacts the overall growth numbers for Colorado.

With that caveat, let’s examine the industry’s key markets, other than flower. 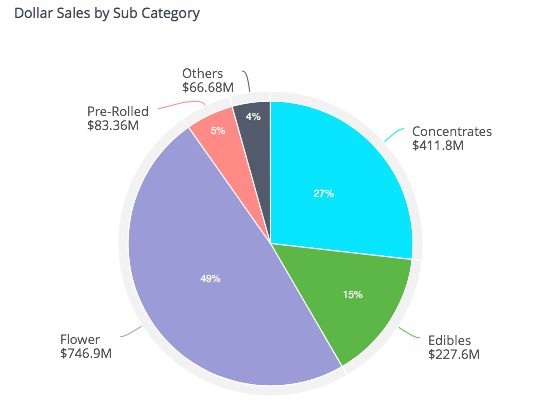 The Colorado cannabis pie in 2017.

Concentrates saw the largest growth rate among the large categories — 35.5 percent on $411.8 million in sales. Strong growth, yes. But down from 2016’s growth rate of 51 percent.

A variety of products comprise the concentrates market, and vape continues to rule, capturing 36 percent of sales and experiencing growth of 69 percent. In 2016, vape owned 29 percent of the market — so 2017 saw the product capture even more market share — but growth was slightly higher in 2016, at 73 percent.

The most impressive growth in concentrates last year was Live Resin, which expanded by 95 percent on sales of $43.3 million. It represents 11 percent of the concentrates market, behind shatter (20 percent of the market) and wax (18 percent), but its growth is much more impressive. Shatter saw growth of 9.3 percent last year, while growth for wax was 16.5 percent.

Edibles in Colorado for 2017

The broad category of edibles, capturing everything from gummy candy to sodas to pills, experienced healthy growth last year — 21 percent on sales of $227.5 million. However, growth fell quite a bit compared to 2016, which saw growth 53.5 percent.

The big story in edibles is the pills category. While all other categories experienced growth of 28 percent or less last year (and infused foods saw negative growth of -2 percent), pills rocketed up by 60 percent, on sales of $17.93 million, compared to the year prior. And to drill down even deeper, tablets — a type of pill — experienced huge growth of 106.5 percent.

The first state to legalize recreational sales of cannabis continues to charge ahead, with impressive growth across the board and startling growth within different categories, like pills. Back in 2015, for example, capsules owned 92 percent of the pills market, and tablets reacehd only 8 percent. But last year, tablets ruled, with 82 percent of sales compared to 18 percent for capsules.

The market evolves — rapidly. With legalization now taking place in so many other states, 2018 promises the unfolding of even more interesting retail trends.