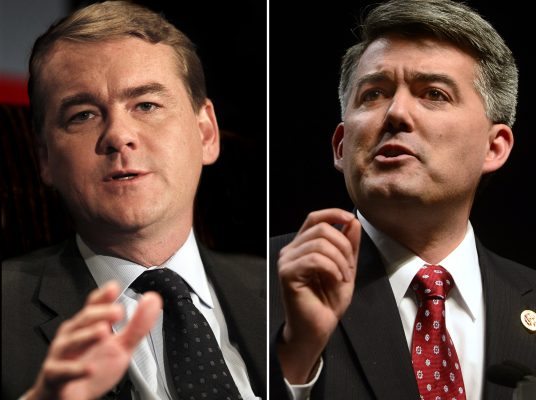 “Doing so will provide the opportunity to pursue federal legislation that both protects the legitimate federal interests at stake and respects the will of the states – both those that have liberalized their marijuana laws and those that have not,” the letter said.

Following Sessions’ move to rescind Obama-era guidance on federal marijuana enforcement, members of Congress have pushed back and conducted emergency meetings to develop a response.

Tuesday’s letter marks the second time Colorado’s senators have teamed up on a letter seeking protections for their state’s marijuana industry.

Gardner, a Republican, and Bennet, a Democrat, previously asked the U.S. Treasury to keep in place Obama-era rules that allow banks to serve marijuana companies. The duo sent a letter Jan. 11 to Kenneth Blanco, who heads the Financial Crimes Enforcement Network at Treasury, requesting he retain a 2014 agency decision that allows banks and credit unions to do work with the cannabis industry “so long as they conducted due diligence such as verifying that the businesses were in compliance with state law.”

The latest letter also marks an escalation in Gardner’s fight to protect both Colorado’s cannabis industry and the state’s sovereignty.

Gardner took to the Senate floor shortly after Sessions’ Jan. 4 marijuana policy shift, calling the move a trampling of Colorado’s rights and announcing he would withhold support for Justice Department nominees until the policy dispute was resolved.

The senator’s fiery speech helped score him a Jan. 10 meeting with the attorney general, however no progress was made, Gardner told The Denver Post.

“I don’t think there was anything new in the (Jan. 10) discussion about (Sessions’) position, other than he doesn’t think that he’s changed anything,” Gardner told the Post. “But clearly what he did (Jan. 4) was, I don’t think, the same commitment that he gave us prior to (his) confirmation.”

More than a month since his blockade began, Gardner is standing firm in his vow to jam all appointments — even as Sessions blames the Republican senator for holding up the confirmations of key figures, including the heads of the department’s national security, criminal and civil rights divisions.

The latest effort by Colorado’s senators to protect state marijuana laws with a rider inserted into must-pass spending legislation isn’t a new strategy in Congress.

An amendment preventing the Justice Department from using federal funds to prosecute individuals in states where medical marijuana is legal has been included in appropriations bills since 2014. The so-called Rohrabacher-Blumenaeur amendment remains in place, and Rep. Earl Blumenauer, D-Ore., a co-sponsor of the amendment, has said that efforts are ongoing to include the language in upcoming appropriations legislation.

Nearly 70 U.S. representatives signed a Jan. 12 letter sent by Colorado Democratic Rep. Jared Polis to U.S. House of Representatives leadership requesting the inclusion of a provision known as the McClintock-Polis Amendment in federal spending legislation. The rider would ensure Justice Department funds cannot be used to interfere with states that have authorized some form of marijuana legalization.

Polis subsequently attempted to push the protections into the continuing resolution to fund the government, but was blocked by powerful House Republicans, including fellow Coloradan Rep. Ken Buck.