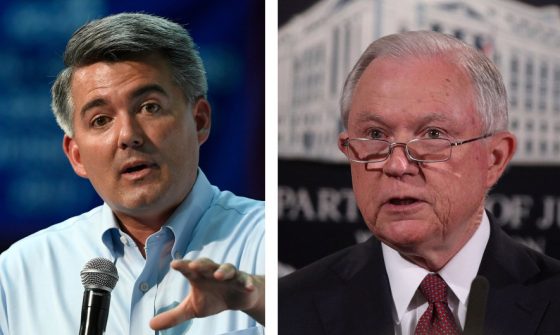 What an interesting battle Colorado’s junior senator — Republican Cory Gardner — has launched against fellow law-and-order conservative Jeff Sessions. For weeks now Gardner has blocked Senate confirmation of Justice Department nominees to try to knock some sense into the attorney general for threatening states like ours that have legalized recreational use of marijuana.

We applaud Gardner’s efforts, though with some caveats, and hope he prevails. The Obama administration should have done more to protect states when it had the chance, but the Cole-memo direction to respect states’ rights on legal cannabis was working fine. Sessions was wrong to rescind it.

The attorney general started this wrongheaded fight despite assurances he gave Gardner and other senators that he would leave pot-friendly states be. After all, the immigration hardliner said, while lobbying for his own Senate confirmation, that he expected to be too busy running President Donald Trump’s crackdown on illegal immigration.

It’s worth repeating that Sessions loathes pot, once joked that he thought the Ku Klux Klan was OK until he found out some of its members enjoyed the drug, and believes that those who use it aren’t good people.

Read the rest of this story on DenverPost.com