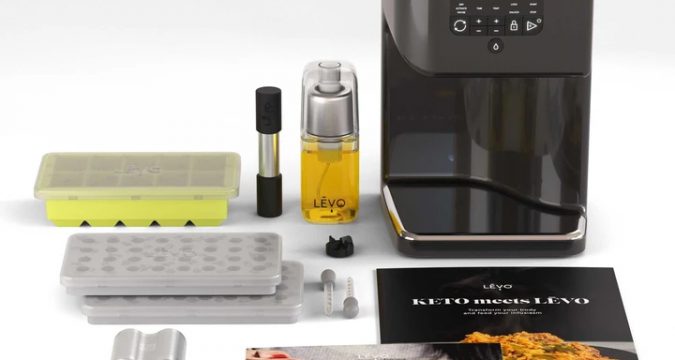 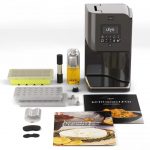 Once in a lifetime a product comes to market that is a complete and total game changer. A quantum leap in the way you used to do something which makes you steep back and ask yourself how you ever got along without it.

If you make edibles (or just about anything that requires oil infusing), the LEVO 2 Oil Infuser is that next-generation product. It doesn’t just change the game; it changes the whole damn sport.

For those of us who make edibles on a regular basis, the routine is pretty much the same. First, we stink up the house by decarbing some quality flower in the oven, then we put that delicious flower into a crockpot, dump in some olive or coconut oil, and let it stew (further stinking up the place) for a few hours.

The result is a sludgy mess that we then have to filter in order to have some relatively decent tasting infused treats. Filtering is a time consuming and messy task in its own right, and it still produces subpar results.

In my dreams, I always wanted to just be able to put everything into one device and have is spit out super clean oil ready for infusing. I bought a Magical Butter machine thinking that this would be my saving grace, but alas, it most definitely was not.

Decarbing was still a separate process, and I still had to filter the oil after. In the end, I felt like all I managed to do was to replace my crockpot with a different one. Then I bought a Nova decarboxylator to handle the decarbing.

I soon found that it was no better than my oven, with the exception of being smaller. It still smelled up my house and, to be honest, gave pretty inconsistent results. I had successfully transitioned the process from 2 large devices to two smaller devices, and I still had the messy job of filtering the oil in the end.

During this time of frustration, I found the Original LEVO. At the time, I was tired of collecting gadgets and so I passed on buying another one. To be honest, I figured that technology was just not quite up to the task of meeting all of my crazy demands so I stopped looking – hoping that one day someone would figure it out.

While surfing the net for something totally unrelated, (you know how that goes) I saw an advertisement for the LEVO 2 Oil Infuser. I remembered looking at the original LEVO so I decided to check out what (if any) improvements they had come up with. Within minutes, my mind was blown.

The first thing I noticed was that the LEVO II was beautifully designed. It had a sleek, high-end style that resembled an Italian espresso machine. This was something that you could leave out on the counter and not wince every time you passed by. Intrigued by the design, I dove into the specs to see what this new device was capable of doing.

Can it be true?

When I started reading its resume, my heart started pounding in my chest with excitement! Not only was the LEVO II an oil infuser, but it also was capable of drying and decarbing as well! Could it be that someone had finally made the product I have been dreaming about for so long?

My happiness started fading a bit once I started mentally recalling some of the many over-hyped and under delivered products that I have purchased in the past. I was really hoping that this would not be one of those and decided to give it a shot.

Worst case was I had another addition to my dust-gathering high-tech device collection, best case meant my dreams had been answered. Given the price tag I was really hoping for the latter. I decided to pull the trigger and hope for the best.

My doorbell rang at 9:50 am and I was greeted by Mike, my FedEx delivery guy. Mike seemed much more upbeat than usual this morning as he handed me my box emblazoned with the LEVO name. He handed me the box and said: “You are going to love that!”

After a brief discussion, I learned that Mike’s girlfriend was a Chef and they owned 2 of these for infusing olive oils (of the non-cannabis variety) for her catering company. Up to this point, I really had not even thought about using this for anything other than weed, but as an amateur chef myself, it made me start thinking.

Now I was more excited than I was before and could not wait to check it out. I thanked Mike, went inside and tore the box apart.

With the packing box gone, a beautiful black box sat before me. The box itself was nicely designed with an elegant look and feel to it. The information on the sides alluded to even more uses for the device than I had previously entertained. My pulse was quickening…

After removing the LEVO II from the packaging, I set it on my table to give it a once over. The device itself is visually stunning – the pictures don’t even begin to give it justice. The lines were sleek and smooth, it truly gave the appearance of a very high-end product. It was much heavier than I expected, giving it a solid feel to go along with the looks.

The lid on top of the device is activated by pushing down, thus releasing the lock. Inside there is a non-stick vessel to hold the oil, a black silicone disk, and a metallic container for holding the herbs for infusion. After reading the manual (which itself is very detailed and well thought out), I discovered that the black disk was a custom designed magnetic stirrer!

Let’s see how it works

I was eager to put the LEVO II to the test, so after thumbing through the manual I grabbed an 8th of Hindu Kush and a bottle of Extra Virgin Olive Oil. (The Power Pod will hold up to ¼ oz.) My first test was to see how badly it stunk up the house when decarbing and infusing. I was hoping for the best but planning for the worst.

After breaking up the fragrant buds and placing them in the herb container (called the Power Pod), I closed the lid and chose “Activate”. I selected a temperature of 250 degrees F. and a time of 1 hour for this experiment. The Activate setting can be adjusted up to 275 F. and 2 hours so you can customize it to your needs.

The main reason I was looking forward to the LEVO was that it claimed to have little to no aroma when decarbing. Those claims turned out to be true – there was only a slight odor during the process (much less than the oven method). It is not completely stealthy though, for as soon as you open the unit upon completion the scent escapes like a skunk backed into a corner. I guess there’s no way of getting around that.

Now that I had my properly decarbed Kush, the next step was to add the oil. I poured olive oil into the ceramic coated reservoir until it reached the MAX line (about 19 ounces) and closed the lid. For this test, I chose to infuse at 175 F. for 2 hours. The display began to count down the time until completion. The occasional whirring sound of the magnetic stirrer was the only sound in an otherwise silent process.

Once the LEVO had completed the cycle, I held the “Dispense” button down and watched my golden concoction stream into my collection jar. It smelled absolutely delicious and, most importantly, it was crystal clean. The difference between the end products from the LEVO II and the Magical Butter were night and day.

I tested the resulting oil with my tCheck home potency tester just to see how efficient the LEVO was in extracting the good stuff. It was nice to see that I appeared to grab the majority of the cannabinoids, but I am sure that there is still a little bit left in the oil-soaked herb. I spread that out on parchment paper to dry out a bit before stuffing the remains into capsules for consumption later. (waste not, want not)

All this is great, but if you have to spend an hour cleaning the device it kinda ruins it. Thankfully the designers actually thought about that! The LEVO II quickly and easily comes apart for cleaning and the parts are dishwasher safe! This is much easier to clean than my espresso machine.

After making about 15 different batches of infused oils with Olive, Walnut, and Coconut oils I have to say that I am highly impressed! Besides cannabis, I also used Rosemary, Sage, Garlic and other herbs all with excellent results. My kitchen cabinet has a dozen bottles of some of the most amazing infused oils that you could ever want.

While it’s great to have a functional device, I have to say that the visual design really steals the show – you don’t have to hide this one. I keep it out on the counter top and its beauty never fails to grab the attention of guests. After telling them what it does and showing them some of the results, I am certain that quite a few will be owners soon if not already.

The LEVO II is the ultimate culmination of form and function. Even if you don’t use cannabis, the LEVO II is still worth the price of entry just for infusing cooking oils. You can also use this to create your own essential oils saving a ton of money in the long run.

The big question is as always, is it worth the cost? In my opinion: without a doubt. I believe that the LEVO II will pay for itself within a few months of use. The unit is very easy to use and produces outstanding results. For those on the fence, the LEVO II also comes with a 3 year warranty and an unheard of 100 day free trial so you have nothing to lose!

Do yourself a favor and go pick one up right now. I guarantee that you will not regret it!

wpDiscuz
6
0
Your questions and comments are welcome!x
()
x
| Reply