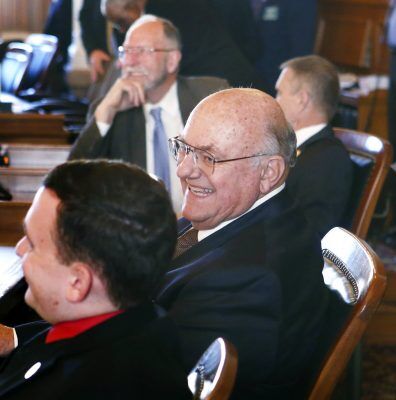 TOPEKA, Kan. — A white Kansas lawmaker who suggested at a public forum that blacks were predisposed to abusing drugs resigned from two legislative committee leadership jobs on Tuesday but did not give up his seat in the Legislature.

Republican Rep. Steve Alford, from the western Kansas town of Ulysses, faced calls on social media to leave office altogether from critics who saw his remarks as racist. And a black House member said Alford should resign from the Legislature.

Alford stepped down as chairman of the House Children and Seniors Committee and as vice chairman of a joint legislative task force on child welfare. He won’t keep a seat on either panel but will retain other committee assignments.

“We came to a mutual understanding,” House Speaker Ron Ryckman Jr., a Kansas City-area Republican, told reporters after meeting Tuesday with Alford. “His remarks were disappointment and unfortunate.”

“Until he resigns from the Legislature, there is no difference,” Winn said. “You owe that to your constituents and the state of Kansas.”

Alford declined to comment Tuesday after issuing a statement saying he was giving up the two jobs and attending the day’s House session.

During the public meeting Saturday in Garden City, Alford discussed his opposition to legalizing any use of marijuana and referenced a time in the 1930s when it was outlawed.

Kansas is one of the few remaining states that haven’t legalized some form of medical marijuana, including low-THC marijuana derivatives that can’t get a user high. But the legalization question has been percolating in Kansas in recent years.

Related: Is Kansas next to legalize medical marijuana?

The 75-year-old Alford said marijuana and other drugs were prohibited partly because blacks responded “the worst” to the drugs “because of their character makeup — their genetics and that.” None of the roughly 60 people in the crowd was black.

One NAACP leader later called Alford “an idiot” over the remarks. Rep. Willie Dove, a black Kansas City-area Republican, said Tuesday that he found Alford’s comments “unbelievable” and previously, “There were no signs he felt that way.”

The Garden City Telegram first reported on the statement Monday and posted a video of it to YouTube. Alford apologized later that day, saying: “I was wrong, I regret my comments, and I sincerely apologize to anyone whom I have hurt.”

Alford, a farmer, was first elected to the House in 2010 and became chairman of its Children and Seniors Committee in January 2017. He also was chairman of the child welfare task force last year; its top post rotated to the Senate this year.

It’s not clear whether Alford will face further disciplinary action.

But under the House rules, if a member or members files a formal complaint, Ryckman must appoint an investigating committee to make recommendations on whether a member should be censured or removed. However, no lawmaker has talked publicly so far of filing a complaint against Alford.

Winn faced such an investigation in 2015, when nine Republicans, including Dove, objected to remarks she made during a committee hearing, calling an immigration bill racist. The investigating committee ultimately dismissed the complaint.

There was no such investigation in 2011 over a remark by then-Rep. Virgil Peck, a Republican from southeastern Kansas, in response to a proposal to control the state’s feral hog population by allowing the swine to be shot from helicopters. Peck said in a committee hearing that perhaps the state had found a solution “to our illegal immigration problem.”

Peck apologized for what he called a “regrettable” joke and won two more House terms before failing in a bid for the Senate in 2016.

Asked whether Alford should leave the Legislature, Dove said: “That’s up to his district.”