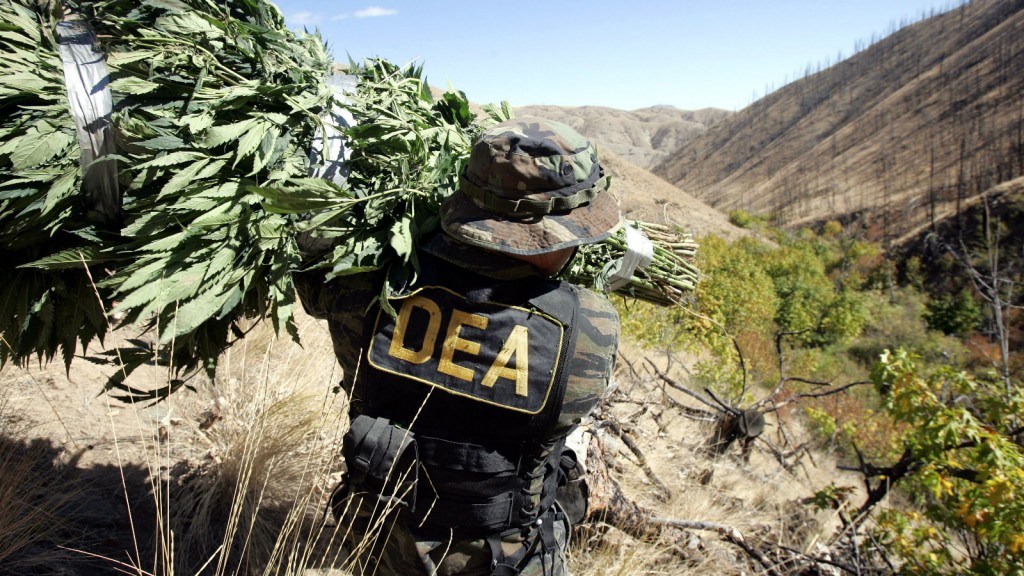 With his announcement that he is freeing federal prosecutors to go after marijuana operations in states where it is legal, Attorney General Jeff Sessions has excited strong bipartisan opposition — splitting the Republicans, providing a potential opening for Democrats in the 2018 elections, and energizing supporters of just ending marijuana prohibition once and for all.

On Thursday, after a year of dilly-dallying, the fervently anti-marijuana Sessions declared that he was rescinding Obama-era guidance to federal prosecutors which basically told them to keep their hands off marijuana operations that were acting in compliance with state laws.

The move not only puts Sessions at odds with public opinion, it also puts the lie to President Trump’s campaign position that marijuana policy was best left to the states.

With legalization of marijuana enjoying consistent majority support in opinion polls — a Pew poll released Friday put support at 61% — the blowback has been immediate, fierce, and across the board. Feeling particularly vulnerable, legal pot state Republicans howled especially loudly.

“I am obligated to the people of Colorado to take all steps necessary to protect the state of Colorado and their rights,” said Sen. Cory Gardner (R-CO), taking to the Senate floor to announce his amazement and dismay at the move. He threatened to block all Justice Department nominees until Sessions relents.

Gardner, who has been a staunch Trump supporter, said that both Trump and Sessions had assured him before he voted to confirm Sessions as attorney general that going after legal marijuana in the states was not a priority. He wasn’t happy with the turnabout.

Neither was another Republican legal pot state senator, Lisa Murkowski of Alaska. In a statement released Thursday afternoon, she said she had repeatedly urged Sessions to leave legal weed alone. His move Thursday was “regrettable and divisive,” she said.

Maine is about to become a legal marijuana state — if the Sessions move doesn’t throw a wrench in the works — leaving Republican Sen. Susan Collins, who supported Sessions’ nomination, walking a tight-rope.

While Collins acknowledges the medical uses of marijuana, according to her spokesperson, Christopher Knight, “there is considerable scientific and medical evidence of the detrimental impact that marijuana can have on the brain development of otherwise healthy teenagers,” Knight said, according the the Press Herald. “Congress and the Department of Justice should review the Controlled Substances Act, which generally prohibits growing, distributing or using marijuana, in light of current medical evidence as well as actions taken by states.”

Marijuana should be “a states’ rights issue,” said Sen. Rand Paul (R-KY), who doesn’t represent a legal marijuana state, but has long been a proponent of drug law reform. “The federal government has better things to focus on.”

Another leading Trump ally, Rep. Matt Gaetz (R-FL), doesn’t represent a legal pot state, but he does represent a medical marijuana state. He’s not happy, either, calling the move “heartless and cold.” Sessions’ move “shows his desire to pursue an antiquated, disproven dogma instead of the will of the American people. He should focus his energies on prosecuting criminals, not patients.”

And that’s from friends of the administration. The Democrats, unsurprisingly, are even harsher.

Congressional Democrats were quick to pounce on what they correctly perceived as an opening to attack Trump and Sessions on an issue where the public is not on their side. And House Speaker Nancy Pelosi (D-CA), whose state just began the legal sale of recreational marijuana this week, led the way.

“Attorney General Jeff Sessions’ decision bulldozes over the will of the American people and insults the democratic process under which majorities of voters in California and in states across the nation supported decriminalization at the ballot box,” Pelosi said. “Yet again, Republicans expose their utter hypocrisy in paying lip service to states’ rights while trampling over laws they personally dislike.”

Pelosi and Sen. Patrick Leahy (D-VT) said they would attempt to block Sessions by extending a current ban on Justice Department funding to go after medical marijuana in states where it is legal. But that would not protect the legalization states.

Other legalization state Democrats were also quick to go on the offensive and happy to throw the “states’ rights” issue in the face of Republicans.

“It is absurd that Attorney General Sessions has broken Trump’s campaign promise and is now waging war on legal marijuana and states’ rights,” said Rep. Jared Polis (D-CO), cochair of the Congressional Cannabis Caucus. “The growing Colorado economy is in jeopardy with the news that the Attorney General will now go after states that have decided to regulate marijuana. The Trump Administration needs to back off, and allow marijuana to be treated like alcohol under the law. At stake is a growing industry that has created 23,000 jobs and generated $200 million in tax revenue in Colorado. I’m calling on President Trump to overrule Attorney General Sessions and protect consumers, our economy, the will of the voters, and states’ rights.”

“Trump promised to let states set their own marijuana policies,” charged Sen. Ron Wyden (D-OR). “Now he’s breaking that promise so Jeff Sessions can pursue his extremist anti-marijuana crusade.” Wyden is demanding that any budget negotiations must include protection for legal marijuana states. “Any budget deal,” Wyden said, “must… prevent the federal government from intruding in state-legal, voter-supported decisions.”

That’s just a representative sample of statements from congressional Democrats, who see the Sessions move as an enormous political gift. California House Republicans, for example, were already facing an uphill battle this year, thanks to Trump’s unpopularity in the state. With a Republican administration messing with legal marijuana in the Golden State, they could go extinct in November.

State Officials Stand Up to Washington

It isn’t just politicians in Washington who are taking umbrage with Sessions. Across the legal marijuana states, elected officials are standing up to stick up for the will of the voters.

“As we have told the Department of Justice ever since I-502 was passed in 2012, we will vigorously defend our state’s laws against undue federal infringement,” said Washington Gov. Jay Inslee (D). “In Washington state we have put a system in place that adheres to what we pledged to the people of Washington and the federal government. We are going to keep doing that and overseeing the well-regulated market that Washington voters approved.”

Calling Sessions’ move “deeply concerning and disruptive,” Oregon Gov. Kathleen Brown (D) told the feds to back right off. “States are the laboratories of democracy, where progressive policies are developed and implemented for the benefit of their people,” she said. “Voters in Oregon were clear when they chose for Oregon to legalize the sale of marijuana and the federal government should not stand in the way of the will of Oregonians. My staff and state agencies are working to evaluate reports of the Attorney General’s decision and will fight to continue Oregon’s commitment to a safe and prosperous recreational marijuana market.”

Similar notes were heard from California.

“Akin to the ill-conceived positions the Trump Administration has adopted on so many important public policy topics during the past year, Attorney General Session’s decision today is out of step with the will of the people of not only California, but the 29 states that have legalized either or both medicinal and recreational-use cannabis,” said California Treasurer John Chiang. “The action taken by Attorney General Sessions threatens us with new national divisiveness and casts into turmoil a newly established industry that is creating jobs and tax revenues. Until the slow, clunking machinery of the federal government catches up with the values and will of the people it purportedly serves, states — like California — will continue to both resist and, more importantly, to lead.”

California Lt. Gov. Gavin Newsom (D) also weighed in on what he called Sessions’ “harmful and destructive attempt to revive the failed war on drugs.” Sessions’ position, he added, “defies fact and logic, threatens the promise of a safe, stable, and legal framework for legal marijuana, and is just another part of the Trump administration’s cynical war on America’s largest state — its people and its policies — through policy reversals, health care repeals, and now, marijuana policing.”

The Republicans Own This

Despite the howls from legal pot state Republicans (and a handful of others), this backwards-looking policy shift lies squarely with the GOP and the Trump administration. It is driving wedges between Republicans and widening the gap between the GOP and the desires of the nation.

Whether the Republicans pay a penalty for messing with marijuana come November remains to be seen, but Jeff Sessions may have inadvertently done us a favor: Not only does his move hurt Republican prospects, even endangering control of the House, it may a spark movement to quit dancing around with the end of marijuana prohibition and just get it done.