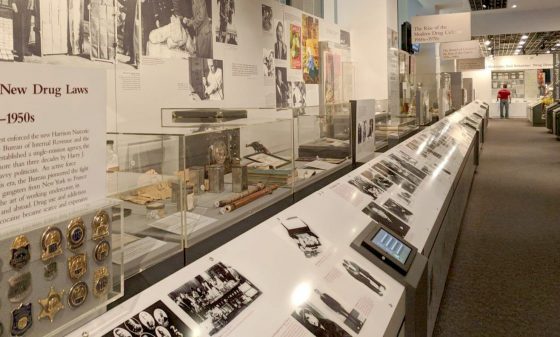 WASHINGTON – Two kinds of people visit the Drug Enforcement Administration Museum and Visitors Center: those who could pass a DEA background check, and those who could not and become increasingly paranoid that they are about to be unmasked and arrested, perhaps by the gift shop cashier. Both kinds of people were evident on my recent visit to the small, free museum, which is tucked into the lobby of the agency’s headquarters in Arlington, Virtginia.

“Who says ‘grass’ anymore?” asked a 20-something guy holding a “Keep Off the Grass” bumper sticker adorned with a crossed-out pot leaf icon, available for a buck at the gift shop.

As for the other kind of people, I ran into two of them inside the museum. Notebooks in hand, they told me they were there to complete an assignment for their college “Drugs and Society” class.

“Do you think all the information in here is accurate?” I asked.

“I should hope so!” one of them replied.

I asked because we were, at that moment, standing in front of a re-creation of a 1990s-era crack house that, to my admittedly inexpert eye, seemed a little conspicuous. For instance, it has a shiny metal door that practically screams, “Attention DEA agents! Crack house here!” Though if you wanted to put your crack house on a block of S&M dungeons, this one would have blended in perfectly.

The two students and I continued to the main part of the museum, which chronicles the history of drug use in America – apparently as written by the world’s squarest 1950s dad.

“‘Hipsters’ – black and white – had little interest in the traditional American Dream, pursuing instead creativity, spontaneous pleasure, freedom and excitement,” proclaims one photo caption, as if that was a bad trade-off. A nearby caption throws subtle shade at musicians of the mid-20th century. “The jazzmen who smoked marijuana felt it improved their music. Non-users felt just the opposite.”

As you would expect, the DEA museum attributes many social ills to drug use, but it’s most convincing when making the case that drugs cause crimes of the fashion variety. Consider, for instance, cases containing green platform boots and a floor-length fur coat worn by undercover agents in the ’70s and ’80s, respectively. Also on display: a metallic-silver shirt worn by an undercover officer involved in something called Operation Rave Review. I’m embarrassed to say that it is nearly identical to a shirt I bought circa 1998. (I was not on drugs when I made this purchase, but the people who talked me into it probably were.)

Perhaps the most thrilling displays – especially to those of us who have never seen them in real life – are the actual drugs. One case contains a smudge of opium from 1923 that was tested and still found to be psychoactive 75 years later, exhibit text says. The evidence bags of desiccated marijuana probably haven’t held up as well, and the exhibit is perhaps purposely mum on whether the crack vials on display contain actual crack.

Another museum highlight is the diamond-encrusted gun of an international drug smuggler – an object simultaneously so attractive and repulsive, it’s a decent metaphor for the glamour and destruction of the drug underworld itself. Interestingly, the museum used to have more firearms on exhibit – including a Glock 17 pistol, a MAC 11 machine gun and a Beretta M9 – but they’ve been removed from display for “safety reasons,” a museum guard told me.

You’d have to be pretty brazen to try to steal things from a museum with a roughly 1-to-1 ratio of armed guards to visitors (at least when I was there). And if you did try, why would you grab old guns when there are diamonds and drugs to be had? I opted not to bring these points up.

Finishing up back at the gift shop, I perused a wide variety of DEA-themed polo shirts, windbreakers and other apparel – all of which answer the question “Are you a narc?” with a resounding, enthusiastic “Yes!” I considered making several ironic purchases, but then I took another look at all those armed guards and decided I’d better not.