The fledgling cannabis industry is full of wide-eyed claims about what pot can do. Outperform your favorite energy drink? Maybe. Cure cancer? Worth a try. The biggest believers and entrepreneurs make the plant sound almost magical. Now one startup has the key to keep the science from the hype: the first-ever full map of the cannabis genome.

“DNA, of course I’m biased because it’s what I do, but it doesn’t lie. It really is a way to just sort of clear a lot of the b.s.,” said CJ Schwartz, chief executive officer of Sunrise Genetics, the Fort Collins, Colorado-based company behind the map. “The excessive claims are really doing a disservice to the plant or the potential of the plant and the science surrounding that.”

A deeper understanding of genetics means companies will be able to figure out which parts of cannabis’s makeup drive different functions, making it easier to test for strain continuity and breed plants more quickly and effectively. Schwartz said the genome research can allow for more targeted recreational products by specifying exactly how a product might affect the body or mind, for instance by making a consumer feel tired or energized.

But knowledge of the full genome itself, which will be presented for the first time at the Plant and Animal Genome Conference in San Diego on January 17, also opens the door to the prospect of making good on some of the loftier possibilities for legal marijuana. A cannabis-based energy drink or sleepy-time tea could be on the horizon. Research aided by the genome map might identify potential cannabis-based medicine for further testing, bringing about a marijuana-derived painkiller or alternative to Viagra. (Another application: higher-tech breeding for industrial hemp, a variety of cannabis plant that can be used in clothing, insulation, food or lighter-weight concrete.)

This map isn’t the first attempt to suss out the genetic makeup of cannabis; previous efforts lacked the coordinated research resources and stable plant population to make the picture clear. There are 10 pieces that make up the genome, and Sunrise’s higher-resolution sequence can see what those strings are made of and where on those pieces the genes are located, said Chris Grassa, the company’s consulting director of bioinformatics.

Grassa compared the Sunrise genome to having both a topographical map of the U.S. and an annotated map with city names and the ability to predict the driving distances between two locations. “We can basically have a 23andMe for cannabis,” he said, referring to the popular human genetic testing company.

Sunrise was founded by Schwartz, a plant scientist, who recruited his brother and his brother’s brother-in-law and a family friend in 2014—the year pot became legal in Colorado—with the idea to take well-established genetic tools used for other crops and apply them to cannabis. Sunrise identifies strains and specific traits within plants to develop breeding programs for cannabis companies.

While the co-founders had previously discussed the importance of a genome map, they assumed someone else was going to get to it first. And then they decided to do it themselves, assembling a crew of scientists and cannabis industry veterans to combine the plant populations and genomic sequencing chops.

“We pretty much waited as long as we could, but it was really necessary for us to get this assembly to be able to move on with efficient gene discovery,” said CJ Schwartz. “Without this information, it just takes too long, it’s too expensive.”

Using genome maps for breeding purposes isn’t a new concept. Big agricultural companies have long done so for crops such as corn, wheat and tobacco.

“At Monsanto, they do the same thing,” said Todd Michael, professor and director of informatics at the J. Craig Venter Institute in La Jolla, California. “They want to breed better corn, so they want us to make the corn map and then find very specific differences between them so then we can breed them.” Michael, who previously led the Genome Center at Monsanto, is a scientific adviser to Sunrise and his lab did a portion of the physical sequencing.

The reason it’s taken so long to get to this point with cannabis is largely due to the regulatory difficulties. The plant is still classified as a Schedule 1 drug by the U.S. Controlled Substances Act, meaning marijuana is ranked in the same category as heroin under federal law. Many research universities and scientists depend on government grants.

George Weiblen, a professor in the plant biology department at the University of Minnesota, may know the difficulty of working with cannabis better than anybody. His lab has been researching the plant since 2002, when it was the only facility in the country that had the U.S. Drug Enforcement Administration’s permission to study the genetics of marijuana.  That meant Weiblen had to figure out how to create a compliant research environment, without any previous guidance. He had limited access to seeds, received minimal funding and had to set up prison-level security for the lab.

“That’s how we were able to get started,” Weiblen said. “I like to remind my graduate students who are working in the lab that they are working within the confines of a minimum-security prison. But rather than trying to keep them in, we’re trying to keep other people out.”

He was allowed to grow only 25 plants at a time, and as a result it took his group 12 years to publish a paper identifying the gene that differentiates hemp from marijuana. “We endured many years of ridicule and neglect,” Weiblen said. “All of a sudden there’s tremendous interest in understanding the genetics of the plant.” 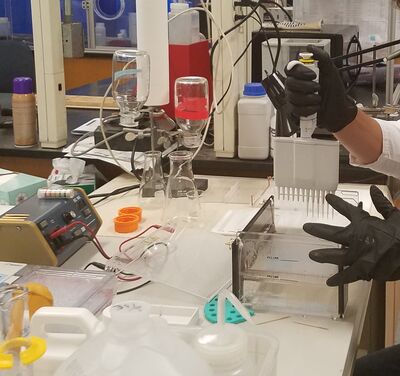 The research Weiblen had done and the plant population he had cultivated proved essential for the completion of the map. He managed to publish a preliminary genomic map, which he now compares to an early, distorted representation of North America.

Even now that there’s broader interest in marijuana—the rapidly growing industry is expected to reach $50 billion by 2026, up from $6 billion in 2016, according to the investment bank Cowen & Co.—regulatory hurdles make the work difficult. Sunrise Genetics goes by that name, politely scrubbed of pot references, to avoid unwanted attention, Jason Schwartz said.

Cannabis’s status under federal law continues to complicate Sunrise’s efforts to physically obtain DNA. To get what’s needed to identify strains, the company needs a newly formed leaf from a plant. Even though those leaves aren’t consumable, it still counts as marijuana under the Controlled Substances Act. Scientists sharing leaves are, technically, distributing illicit drugs.

“There’s no differentiation between the little tiny leaf that no one can smoke and the end product, which people can consume, in the federal eyes legally,” Jason Schwartz said. “You can’t just have people mail you stuff across state borders.”

Once the leaf is processed into DNA, however, Sunrise says it’s fine to mail; after all, DNA is mailed every time someone licks a stamp. Still, Jason Schwartz admits there isn’t much legal clarity. “We have to make some interpretation of what we think the laws would be and err on the side of caution, because we obviously want to work on the right side of the law,” he said.

Collection also requires finding willing partners. That hasn’t been easy, particularly because many cannabis growers have been in the business too long to trust outsiders with their secrets. “You meet a lot of characters in this industry,” he said. “Now that it’s finally aboveboard, you don’t just drop that paranoia.”

Next comes the question of how the businesses will use the full genome map. “There’s such potential to make things better, and that’s really what our goal is: to guide that using modern techniques, which are employed all the time by all the major ag companies,” CJ Schwartz said. “Cannabis pretty much now is catching up—as long as we don’t get all thrown in jail.”