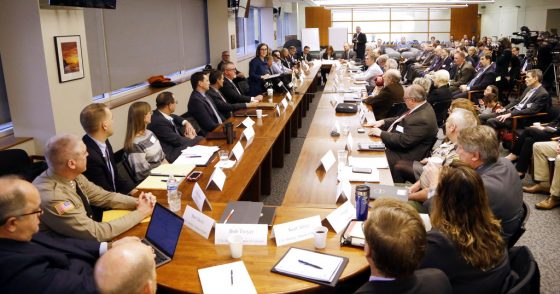 By Gillian Flaccus, The Associated Press

PORTLAND, Ore. — Oregon’s top federal prosecutor said Friday the state has a “formidable” problem with marijuana overproduction that winds up on the black market and that he wants to work with state and local leaders and the pot industry to do something about it.

The meeting included representatives from 14 other U.S. attorney’s offices, the FBI, the U.S. Postal Inspection Service, the U.S. Forest Service and U.S. Customs and Border Protection. Nine U.S. attorneys attended in person, including those from California, Washington, Colorado, Idaho and Nevada.

Williams sought to calm fears among pot growers that his office would target legal growers in Oregon, but said the market has a problem that must be addressed. Everyone needs a “bottom-line answer” on how much excess marijuana is being produced and how much is being smuggled out to other states where weed remains illegal, he said.

The surplus attracts criminal networks and generates money laundering, drug violence and environmental contamination from pesticides and draws down water supplies in rural communities, he said.

“Here’s what I know in terms of the landscape here in Oregon, and that is, we have an identifiable and formidable marijuana overproduction and diversion problem,” he said.

Williams added: “And make no mistake about it, we’re going to do something about it.”

Oregon Gov. Kate Brown, a Democrat, thanked Williams for his “pragmatic approach” but also sought to tamp down fears that legitimate marijuana businesses would be targeted.

“In Oregon, we like to come together around a table and tackle these challenges and (we) call it the ‘Oregon way’ — that we work collaboratively to solve problems here,” she said, adding that Williams told her Oregon marijuana businesses are “not targets of law enforcement.”

There is general agreement that some marijuana from Oregon does wind up in other states where it isn’t legal. Still, it’s hard to say if pot smuggling has gotten worse in Oregon — where illicit pot farmers were thriving long before recreational legalization — or how much of the marijuana leaving the state filters out from the legal side.

Williams laid out his plans for the unprecedented event in a recent newspaper column, saying Oregon has a “massive marijuana overproduction problem” that is attracting cartels and criminal networks and sparking money laundering, violence and environmental woes.

“In sum, I have significant concerns about the state’s current regulatory framework and the resources allocated to policing marijuana in Oregon,” Williams wrote in The Oregonian, adding the summit and the state’s response to his concerns would “inform our federal enforcement strategy.”

Darwin Roberts, a former federal prosecutor in Seattle who also worked on marijuana issues as a senior official in the Washington Attorney General’s Office, said he wasn’t surprised to see Williams’ concerns. But he added the Justice Department is in a tough spot: If it shuts down states’ marijuana programs, it will drive that activity back to the black market, where neither the feds nor state authorities have the resources to deal with it.

“The Justice Department clearly is unhappy that the states aren’t doing more to stop marijuana activity outside the state legal system,” Roberts said. “I suspect that for DOJ to allow the states to keep making money off legal marijuana, DOJ will want to see a real commitment of state tax dollars to law enforcement efforts against black market growing and trafficking heading out of state.”

In his column, Williams said law enforcement in 16 other states have reported seizing marijuana from Oregon and postal agents have intercepted more than 2,600 pounds of pot in outbound packages and over $1.2 million in associated cash.

Advocates dismiss the idea that legalization has caused a spike in black markets sales. It’s just that now, because it’s legal, it’s much easier to track it back, they said.

“When I moved to Oregon in 1979, cannabis was a billion-dollar crop then, so the notion that this is somehow caused by legalization or by the medical program is something that’s misplaced,” said Leland Berger, an attorney who specializes in marijuana cases.

“When it’s intercepted out of state it’s easier to document where it came from, but I’m a little disappointed that it’s viewed as a new and huge problem.”

States that have legalized marijuana for recreational and medical use have taken varying approaches to satisfying federal law enforcement priorities, in an effort to pre-empt raids or even a Justice Department lawsuit that could undermine the newly regulated markets. They’ve also adjusted their approaches as their markets matured.

Oregon voters approved the sale of recreational marijuana in 2014, and it became legal the following year. The state has allowed medical marijuana since 1998.

It now has about 900 licensed recreational growers, with more than 1,100 licenses awaiting approval and no cap on the number of licenses it will grant. Another roughly 25,600 growers in the state produce cannabis for medical marijuana patients. More than 500 retailers are licensed to sell recreational weed, with nearly 250 applications pending.

Washington launched recreational sales in 2014, the same year as Colorado. It started off with relatively low caps on the number of licensed retail marijuana stores and for the size of grow operations. Both measures were designed to prevent an oversupply of cannabis that might make its way into the black market.

As its industry grew, Washington merged its unregulated medical market with the strictly regulated recreational one. It now has more than 500 licensed retailers, though not all are operating, and nearly 1,200 licensed growers.

In Oregon, the medical and recreational marijuana industries still operate separately, although the number of medical pot dispensaries has dropped precipitously as retailers move toward the more lucrative recreational cannabis sales.

Coupled with Oregon’s small population — 4 million people total — and its reputation as a prime cannabis-growing location on a par with Northern California, a surplus was predictable here, Crawford said. He estimated Oregon growers produce up to three times the amount of marijuana that the state can absorb legally each year.

“You created this huge industry that has nowhere to put its product,” Crawford said.

“If you were an investor and you had just dropped $4 million into a (marijuana) grow and you had thousands of pounds of flower that was ready to go but you had nowhere to sell it … if you want any of your money back, the only thing you can do is sell it on the black market,” he said. “It was a system designed for failure.”

Oregon has begun taking steps to address diversion to the black market. The state will soon require medical marijuana growers to adopt a seed-to-sale tracking system that it uses for recreational marijuana. It is also allowing medical growers to sell some of their surplus to wholesalers for sale in recreational dispensaries as medical pot shops dry up.

At a recent meeting of a medical marijuana advisory commission, members identified the pot surplus leaving Oregon as its No. 1 priority. Lawmakers are also taking the issue seriously: A bill last year to allow the governor to enter into sales compacts with other marijuana states didn’t make it to a vote, but there is interest in reviving the idea.

Those in the industry in Oregon are cautiously optimistic about the summit.

“It’s a brand-new industry operating legally under state law and illegally under federal law — and that’s hard to balance. That’s one of the purposes of this summit. Let’s talk about it,” said Anthony Taylor, president of Compassionate Oregon, which advocates for medical marijuana patients.

“I think everybody realizes it’s a discussion that needs to happen.”