Skip to Content
Home All Posts News USPS: An Inside Look at the Black Market Marijuana Shipping Business
Share
0

Cannabis has been under strict federal prohibition in the United States for more than a half-century, yet the government has been able to profit tremendously from it — albeit indirectly — via black market shipments made through the United States Postal Service (USPS).

Although the USPS publicly claims they are intent on stopping Americans from using the mail service to transport cannabis, the evidence suggests they have not been very successful. According to a recent Freedom of Information Act request by Denver ABC News affiliate Channel 7, the number of seized packages containing marijuana that were discovered in Colorado has risen every year since 2012, including 934 packages in 2017, up from 805 the prior year.

While an increase in seizures may make it seem like postal inspectors are ramping up enforcement in Colorado, they aren’t even scratching the surface nationwide.

“The postal service — the mails are — being used to facilitate drug dealing,” former Attorney General Eric Holder said at a 2014 Senate committee hearing. “It is shocking to see the amount of drugs that get pumped into communities all around this country through our mail system, and we have to deal with that.”The Postal Service’s annual audit of packages containing illegal contraband actually shows a downtick in marijuana packages that have been seized over the past few years nationwide, but these numbers tell an incomplete story. 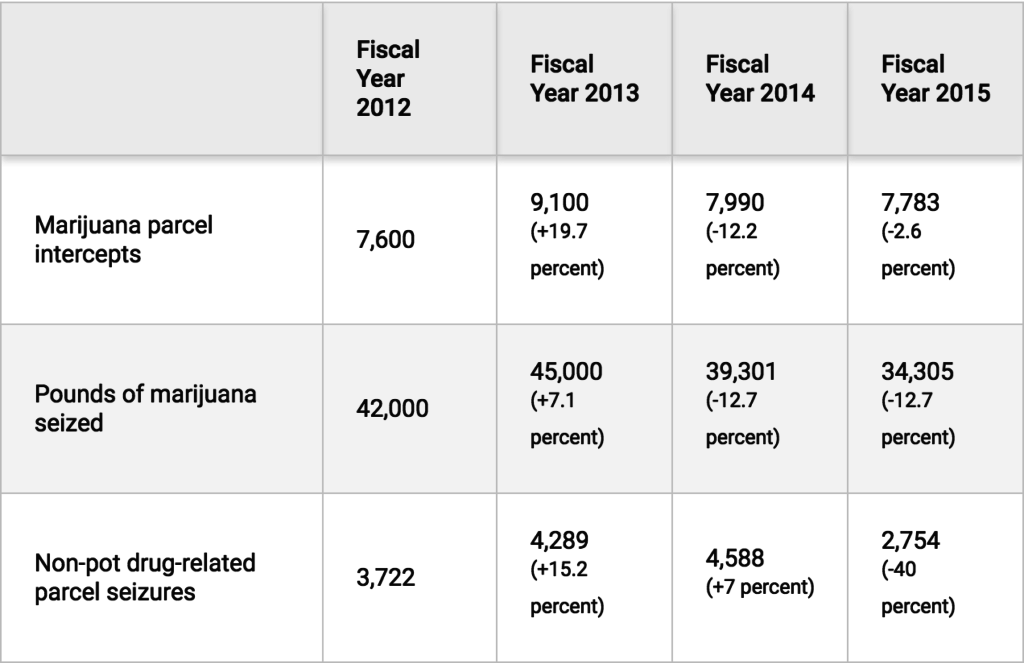 After 2013, the United States Postal Inspection Service reported two consecutive years of decreased marijuana seizures in 2014-15, a dip some attributed to the new legal recreational markets taking hold and beginning to choke out the black market’s output.

The statistics indicated a decrease in the number of pounds seized, which isn’t necessarily a reflection of the actual volume of cannabis being channeled through the USPS. The declining number of pounds seized could also represent fewer resources being spent on chasing marijuana cases than an actual decrease in the number of packages being shipped overall. The exact reason for the decline is unclear.

In 2015, researchers from Carnegie Mellon released a study detailing the scope of currently active darknet drug marketplaces, which primarily use the USPS to facilitate shipping. The study estimated the average daily revenue of the most prominent marketplaces fluctuated between $300,000 to $500,000 each, with cannabis accounting for roughly a quarter of all darknet sales. A seperate 2015 report found the median price of darknet marijuana to be $215.31 an ounce.

Using the reported darknet-wide averages as a basis to find out how many pounds of cannabis get shipped from darknet vendors to private end users, the highest traffic darknet markets were shipping between 21.8 and 36.3 pounds of marijuana every day. Using these averages, the most frequented darknet destinations send between roughly 8,000 and 13,000 pounds of marijuana annually — each.


Why is the post office the preferred method of shipment for weed distributors?

Experienced shippers use the Postal Service because they know it is run by the United States government, unlike privately held competitors like FedEx and UPS. As a government-operated entity, the USPS is bound by our Constitution, which protects citizens and their packages from unwarranted search and seizure. Before USPS can inspect your package, the department must obtain a warrant. They may, however, hold your package until they have a warrant.

First-Class letters and parcels are protected against search and seizure under the Fourth Amendment to the Constitution, and, as such, cannot be opened without a search warrant. If there is probable cause to believe the contents of a First-Class letter or parcel violate federal law, Postal Inspectors can obtain a search warrant to open the mailpiece. Other classes of mail do not contain private correspondence, and therefore may be opened without a warrant.

How do people mail weed?

We spoke with a seasoned veteran of the cannabis shipping business to gain insight on how marijuana fuels the USPS bottom line. The person’s name and references to specific geographic locations have been removed to protect his identity.

Marijuana.com: Can you give us any sort of idea scale-wise of the marijuana problem the USPS faces?

John Doe: I personally know a couple of hundred people that were basically doing the same thing I was. I was responsible for over $1 million in pot being bought and shipped, because to me it was worth a few million. But I was a small fish. Where I was shipping 20 pounds per week, some of these people were sending 150 pounds every week. Everybody out there was shipping back east. It’s crazy, hundreds of millions of dollars are going through the USPS. I know one person who was buying $10 million per year in pot and shipping it up and down the east coast, so you can only imagine what he was making.

MJ: The percentage of packages they seize is so small compared to what must be going through.

JD: Oh, definitely. I only had around 20 packages popped and I did it every week for five years straight. I got away with the vast majority of my shipments.

MJ: Why do people prefer to send marijuana through USPS rather than FedEx or UPS?

JD: The reason everybody ships through USPS is that it’s run by the government, so there’s an extra level of rules and regulations they have to follow. For example, the USPS needs to get a search warrant before they can open your package, whereas if a private shipping company wants to use dogs to sniff out packages of weed, they have that right.

MJ: What would happen when you had a package flagged?

JD: You’d know if your package was flagged and officially reported to authorities because the screen with the tracking information would turn all red and say “seized by US Government” or something similar. If a USPS employee snagged your box and didn’t report it up the chain of command, it would just say “out for delivery” on the tracking screen for eternity. As the sender, who am I going to report that to? Nobody, it’s just the cost of doing business.

MJ: Did you ever have a USPS employee helping you out on either end of the shipment?

JD: Yes, we had someone on the inside on the east coast. We knew him from way back because we smoked with him in high school. He got a job at the USPS around the time we moved out west, so it was really easy. We just gave him a percentage every week to make sure our packages got to where they were supposed to. He never knew what was in the packages, just to let them go through. While it was risky for him, he was making an extra $1,000 every week from us.

The temptation for postal employees to snag a suspicious package here or there (or let one through) is not lost on USPS brass. The organization offers a reward of up to $50,000 to any employee who turns over information or evidence leading to a conviction of “mailing or causing to be mailed any controlled substances, illegal drugs, or the proceeds from the sale of illegal drugs.”

Reports of suspicious package theft by postal employees reportedly became so rampant that the USPS conducted an internal audit to identify and contain the issue.

While the report doesn’t flat-out say that employees were caught putting marijuana-filled packages in their private stash rather than reporting them up the chain, the flurry of redactions and the agency’s actions post-audit at least raise significant suspicion. Following the audit, the USPS announced plans to implement “a nationwide policy for handling, tracking and providing additional security for packages suspected of containing marijuana to reduce the risk of these packages being lost or stolen.”

If you’re wondering how deep in the cannabis mailing game a USPS employee would have to be to turn their nose at a $50,000 reward, look no further than this branch manager from Washington, D.C. who was accused of having received and flipped more than 220 pounds of marijuana.

Washington Post – The acting manager of two D.C. post offices and two of his employees took bribes in exchange for illegally delivering packages of marijuana, according to an indictment filed in D.C. federal court.

Deenvaughn Rowe is charged, along with letter carriers Kendra Brantley and Alicia Norman, with bribery and distribution of a controlled substance. All three were arrested Thursday.

To cover up the scheme, authorities, say, the two carriers would either fail to scan or scan with false information the packages containing marijuana.

Even musicians facing dwindling album sales and measly streaming revenue sometimes decide to try their latex glove-covered hand at sending marijuana through the mail. Houston rapper Maxo Kream has been outspoken in his music about the high risk/high reward business of shipping packs, and while the relatability of his side hustle has likely garnered him throngs of new fans, it has also gotten him in some trouble.

Investigators say Maxo Kream and seven other gang members were shipping marijuana from California to Texas through the mail. A narcotics task force seized 85 pounds of marijuana … and other contraband from homes in Fort Bend and Harris counties.

With the advent of deep web drug marketplaces and expanded marijuana legalization, the practice of shipping cannabis from states where it is prevalent and less expensive to places where top-shelf product is more scarce is commonplace.

This feels like a great time to remind you that if the USPS does decide to make you one of the rare cases they pursue and prosecute, it is still a federal crime to send marijuana through the U.S. mail.