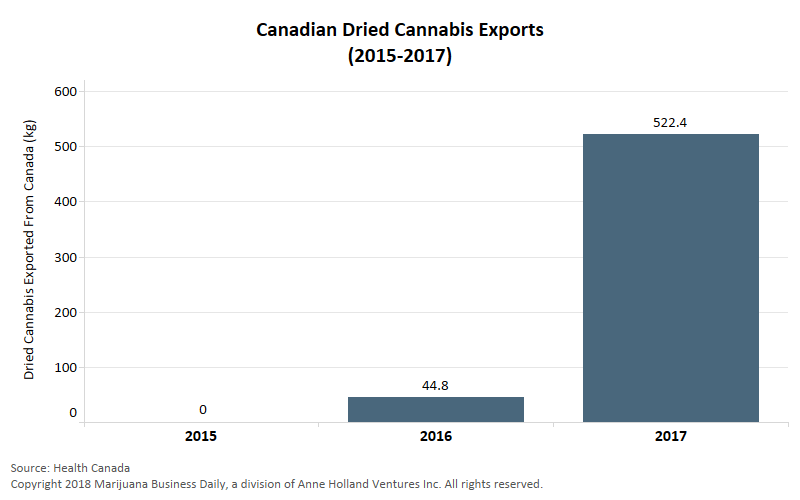 (This is the first installment of a two-part series analyzing medical marijuana exports from Canada. Part II will look at cannabis oil.)

Canadian licensed producers are exporting a record amount of medical cannabis in their drive to establish toeholds in burgeoning overseas markets.

Shipments of dried medical marijuana have soared since 2015, according to data shared with Marijuana Business Daily by Health Canada.

Just over 522 kilograms of dried cannabis was exported to four countries last year, more than 10 times the 44.8 kilograms shipped abroad in 2016.

No medical marijuana was exported in 2015.

Analysts see the trend as a sign Canadian companies are racing to lock up market share in countries that legalize MMJ.

Germany, on track to become one of the world’s largest medical marijuana markets this year, is importing more MMJ from Canada than any other country in lieu of domestic cultivation.

The European Union’s largest economy expects to rely on imports to meet cannabis demand for at least a decade.

The data from Health Canada also shows that export applications are skyrocketing.

In 2016, Health Canada received 11 export applications for dried medical cannabis; in 2017, that number rose to 51 applications.

Russell Stanley, an analyst with Echelon Wealth Partners in Toronto, expects those numbers to continue climbing.

“Existing markets will see significant demand growth,” he said, “while other countries will follow their neighbors and launch their own medical programs.

“As an early, reputable entrant into the export market, Canada could become the de facto standard for importers.”