Opportunities sprout like weeds across the cannabis edibles landscape. But dead-ends, while not as prolific, also lurk in corners of the edibles world. And what stands as a tantalizing route towards success in one state sometimes appears forbidding in others.

Consider tinctures. The form of cannabis that normally comes in a dropper bottle did OK in Colorado in January, with growth of 7 percent on sales of $1.3 million according to cannabis market research firm BDS Analytics. But growth for the broad edibles category — including things like chocolates, beverages and candy — was higher in January, at 9 percent. Clearly tinctures, which capture just 7 percent of the edibles market (compared to 49 percent for candy) are not one of the state’s faster-expanding sales categories.

Consider tinctures again, only instead of contemplating them in the state of enormous mountains and bright sun, think about them in a place with gigantic trees, lots of salmon and not so much brilliant light — Oregon. In the Beaver State, tinctures grew by 141 percent in January, and are the second-largest edibles category in the state, capturing 22 percent of all edibles sales (behind candy, which garnered 51 percent of edibles sales). 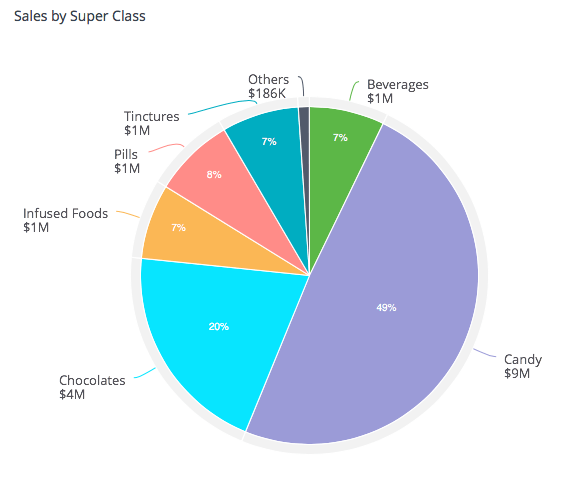 The big-picture look at edibles in January in Colorado

Big differences describe sales for a variety of styles of edibles in Colorado and Oregon. Infused foods (like cookies and brownies), for example, were down 9 percent in Colorado in January, but up by 75 percent in Oregon.

Often, however, microtrends that are gaining traction in one state are mirrored in other states.

The chocolate market offers insights for edibles manufacturers. Overall, it grew at a plodding pace in Colorado in January, with growth of 8 percent. Meanwhile in Oregon, chocolate sales in January plummeted by 22 percent compared to a year earlier.

The big picture look at edibles in Oregon in January

But not all cannabis chocolate is created equal, to consumers in both states.

But chocolate pieces — things like truffles and bon-bons? Sales are booming. Consumers in Colorado in January bought enough truffles to push growth for the category to 151 percent. In Oregon chocolate pieces growth rose to 57.5 percent.

And let’s dip into the wonderful world of gummies, a particular subcategory of edible (rather than a broad category, like chocolate) that is No. 1 in all states. The gummy has ruled in Colorado for a number of years, and growth continues to mount — up 34 percent in January, on sales of $6.5 million.

Oregonians love their gummies, too. Especially so far in 2018. Consumers spent $2.27 million on gummies in Oregon in January, representing growth of 312 percent.