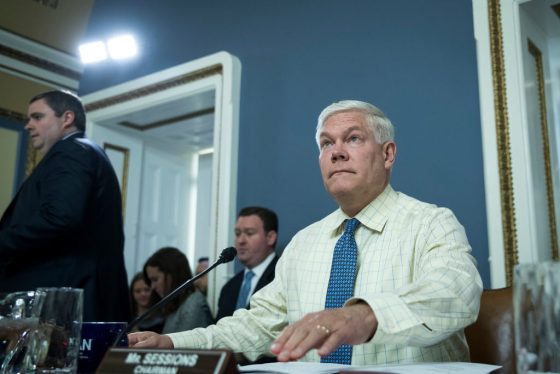 By Jeff Caplan, Fort Worth Star-Telegram

DALLAS — Congressman Pete Sessions used a speech to a group of doctors and other healthcare providers at an opioid epidemic summit Tuesday to suggest that marijuana is the gateway to addiction and as a campaign against the medical and recreational legalization movement.

The Republican from Dallas called the rising number of deaths from opioid overdose a “national crisis” and implored those on the front lines of the fight, the scientific and medical communities, he said, to provide solutions he can bring to Congress, saying he will get the appropriate funding added to next month’s budget bill.

But his speech at the U.S. Department of Health and Human Services Region VI Opioid Summit at UT Southwestern, twice diverted to the perils of marijuana, a subject none of the preceding five speakers broached in discussing the dangers of misuse of prescription opioids by people using them for relief of chronic pain.

Due to more stringent laws designed to make it more difficult for those addicted to opioids such as painkillers to obtain them, some seek out illicit drugs such as heroin and fentanyl that can lead to overdose and death.

“Avoiding death is important, hear me say that, but learning what the facts and factors are, who is a candidate for this, how do we teach them, what does DNA matter to a 14-year-old, where do they start? If it’s marijuana, we ought to stand up and be brave in the medical community to say this political direction is not right,” said Sessions, the chairman of the House Committee on Rules, who led a panel on congressional perspectives about the opioid crisis.

“If addiction is the problem and we have marketers of addiction that include marijuana — because all you have to do is go to any of the stores in Colorado and they can give you high to low to medium to chocolate — we ought to call for it what it is,” Sessions continued. “If it were nicotine, it would have been outlawed; well, it would have been handled differently. But this is a political issue.”

Colorado legalized marijuana for recreational use in 2014. Seven other states, plus the District of Columbia have followed suit.

MAP: Where is weed legal?

Sessions echoed Attorney General Jeff Sessions, who earlier this month stated that “a lot of this,” referring to the opioid crisis, “is starting with marijuana and other drugs, too.”

While marijuana is often the first drug people use, and can lead to using harder drugs, the National Institute on Drug Abuse reported “the majority of people who use marijuana do not go on to use other, ‘harder’ substances.” It also reported that “alcohol and nicotine also prime the brain for a heightened response to other drugs and are, like marijuana, also typically used before a person progresses to other, more harmful substances.”

Sessions, who is up for re-election this year, opened his comments about marijuana, legalized in some form in 30 states and the District of Columbia, told two personal stories that he believes condemns marijuana as a beginner level drug for those ultimately seeking a greater high.

“A dear friend of mine, David Siegel, a wealthy man, one of the wealthiest men in America, had an 18-year-old daughter who was in treatment, I believe for marijuana and maybe cocaine,” Sessions said. “She met a boy there and within three weeks after being out she was dead. She came back and did what she had been doing after being off it.”

The 18-year-old woman was Victoria Siegel, the daughter of the stars of the “Queen of Versailles” documentary. She had reportedly struggled with an addiction to an opioid used to control her seizures. The report by the Orange County (Fla.) Medical Examiner’s Office determined her death was caused by an accidental overdose of methadone and sertraline, both prescription medications.

Sessions later told of a Boy Scout he knew in Lake Highlands, who went off to school at Texas A&M, and fell into heavy drug use started by smoking marijuana.

“Never had smoked marijuana,” Sessions said. “At the end of the first year, he was well into it; the second year, he was into heroin. The drive for addiction with some of our children is insatiable. You just never know when you’re looking at a kid what drives them. But parents are desperate.”

Dr. Vinila Singh, the Chief Medical Officer for the Office of the Assistant Secretary for Health at the U.S. Department of Health and Human Services, has been working closely with Sessions on the opioid issue. She said marijuana has been shown to have medical value, but that more research is needed to better determine potential long-term gains and risks.

“I think with marijuana, there is more research necessary and that’s why a lot of large institutions don’t take a stance yet,” Singh said at the summit.

Users build a tolerance to opioids, requiring them to take increased doses. Singh said she is not aware of studies showing a tolerance to marijuana that would lead to harder drugs. Sessions said marijuana use leads users to “want the next pop.”

A study last year published by the American Journal of Public Health indicated that the start of legal marijuana sales in Colorado may be helping to lower prescription opioid overdose deaths in the state. Colorado officials viewed the report with some skepticism.

Other studies have also indicated that legalized marijuana for medical purposes such as pain management could reduce prescription drug abuse.

Texas recently made it legal to dispense medical marijuana to those with intractable epilepsy.

Sessions, seated next to Singh during a brief interview session following his speech, said he has been led to believe there are “better alternatives, we don’t have to go to that,” referring to liberalized marijuana laws. Singh said she needs more research data to reach a conclusion.