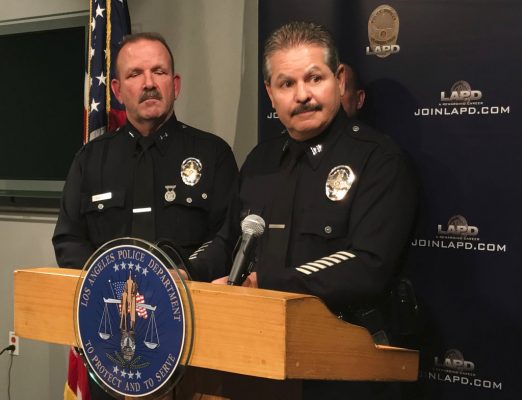 By Michael Balsamo, The Associated Press

LOS ANGELES (AP) — Los Angeles has issued licenses to nearly 100 marijuana retailers but police estimate there are at least two times that number operating illegally in the city and undercutting those who are playing by the rules.

Police have shut down eight illegal marijuana shops since Jan. 1, a pace that is unlikely to intensify as the department is focused on curbing violent crimes.

At least 35 people were arrested during the eight raids, including four people who were taken into custody last week, said Capt. Stephen Carmona. Most of the illegal shops were operating in plain sight — out of storefronts in busy neighborhoods, he said.

So far, only 99 businesses have been issued licenses to sell adult-use, recreational cannabis in Los Angeles. But police estimate between 200 and 300 illegal cannabis shops are operating within the city, Sherman said.

A report from the city’s controller in June estimated there were more than 1,700 legal and illegal dispensaries.

Four people were arrested last Wednesday when officers raided a pot shop in Pacomia. The store initially had a sign outside advertising that it sold medical marijuana. It was later removed and customers were told to come in through a back door, Sherman said.

When police raided the shop, an unlicensed, armed security guard was standing watch inside and officers seized three guns, including one that was stolen within the past two months, he said.

Police will continue to identify such locations, Sherman said at a news conference Wednesday.

“The tracking of these establishments is very difficult because No. 1, we don’t know where they all are all the time, they move frequently, if they can get rent somewhere and move in somewhere, they can pop up somewhere else the next day,” he said.

Because investigations can often be lengthy, police are prioritizing the targeting of shops that are causing crime in an area and generating complaints from the community.

“The nature of serving a search warrant on one of these establishments is just very lengthy,” Sherman said. “Keep in mind this is not the only problem that the police stations or the area captains are working on.”