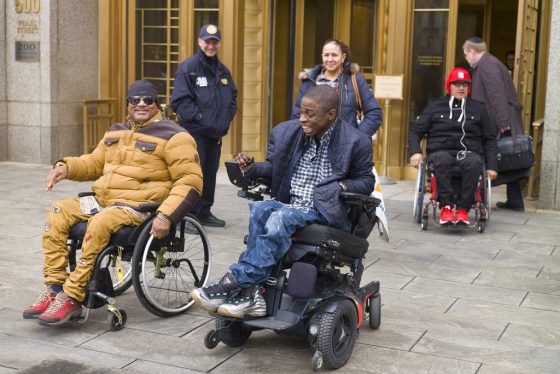 By Karen Matthews, The Associated Press

NEW YORK (AP) — Army veteran Jose Belen says the horrors of the Iraq War left him with post-traumatic stress disorder, and the drug that helped him cope best with the symptoms was one his Veterans Affairs doctors could not legally prescribe: marijuana.

“Once I did use cannabis, immediately I felt the relief,” said Belen, who is now working with other medical marijuana users to mount a long-shot court challenge to federal laws criminalizing the drug.

The 35-year-old, married father of two is one of five plaintiffs in a lawsuit claiming that the government’s decision to classify marijuana as dangerous is irrational, unconstitutional and motivated by politics, not hard science.

A government lawyer argued Wednesday before U.S. District Judge Alvin Hellerstein in New York that the case should be dismissed, citing precedents in which judges upheld the constitutionality of existing marijuana laws.

The government also is arguing that the plaintiffs have not petitioned the Drug Enforcement Agency to reclassify marijuana.

“Any person can submit a petition to the DEA,” Assistant U.S. Attorney Samuel Dolinger said.

The plaintiffs’ lawyers said the administrative process takes an average of nine years.

The suit originally was filed in July as a growing number of states have broken with the federal government and declared marijuana to be legal. Thirty have now legalized it in some fashion, including six for recreational use.

The lawsuit challenges the listing of marijuana as a Schedule I drug, a category that includes heroin and LSD. The federal government says drugs under the classification have no accepted medical use and cannot legally be prescribed.

The lawsuit names the Department of Justice, Attorney General Jeff Sessions and the Drug Enforcement Administration as defendants.

The other plaintiffs include:

— A nonprofit organization called the Cannabis Cultural Association that helps minorities benefit from the marijuana industry in states where it is legal;

Hellerstein, who reserved judgment on the motion to dismiss the case, evinced sympathy for the plaintiffs’ claims that medical marijuana has helped them.

“How could anyone say that your clients’ lives have not been saved by marijuana?” Hellerstein asked Michael Hiller, the lead attorney for the plaintiffs.

But Hellerstein appeared to take the government’s argument that the plaintiffs should petition the DEA seriously.

“When agencies are set up to do the very thing that you want me to do, the right thing to do is defer to the agency,” he said.

Medical research on marijuana has been sharply constrained by federal law. The American Psychiatric Association says there’s not enough evidence to support using marijuana to treat PTSD. A federal science panel said research has found some evidence that a synthetic cousin of the drug might help relieve PTSD symptoms, but also some data suggesting it could make things worse.

Belen said he found it effective for taming PTSD symptoms while other medications pushed him closer to depression and possibly suicide.

He said it is unfair that federal law prohibits him from crossing state lines with the drug, even when traveling to states where it is legal.

“I went to Iraq to free the oppressed and I view this no different,” Belen said. “The oppression is only being done by our own government.”

The plaintiffs have asked the court for the broadest of remedies: a permanent injunction preventing the government from enforcing the Controlled Substances Act as it pertains to cannabis. It isn’t clear what the practical effect of such a ruling would be. Hiller said it would be up to Congress to pass legislation to reschedule the drug.

Marijuana got its Schedule I designation as part of the ranking or “scheduling” of drugs under the 1970 Controlled Substances Act.

According to the lawsuit, Republican President Richard Nixon ignored an expert panel’s recommendation that possession of cannabis for personal use be decriminalized because he wanted to use drug policy to target anti-war protesters and black people.

The lawsuit quotes Nixon domestic policy chief John Ehrlichman, who was quoted in a 2016 Harper’s Magazine story as having said: “We knew we couldn’t make it illegal to be either against the war or black, but by getting the public to associate the hippies with marijuana and blacks with heroin and then criminalizing both heavily, we could disrupt those communities.”

But Hellerstein said he’s not persuaded by arguments about the Nixon administration. “You can’t win with that argument,” he said.

The plaintiffs say marijuana doesn’t meet the Schedule I requirements of having a high potential for abuse, no medical use in treatment and no possibility for safe testing.

The lawsuit notes that in 2014 the Justice Department and the Treasury Department’s Financial Crimes Enforcement Network issued guidance for how banks could provide services to marijuana businesses that were legal under state laws.

Related: Patent No. 6,630,507: Why the U.S. government holds a patent on cannabis plant compounds

Or, used to encourage. Sessions, an opponent of legal marijuana, last month reversed an Obama administration policy of backing off of strict enforcement of federal law in states that have voted to legalize the drug.

Encouraging federal prosecutors to hit hard, he said that Congress had decided that “marijuana is a dangerous drug and that marijuana activity is a serious crime.”

Read the text of the suit