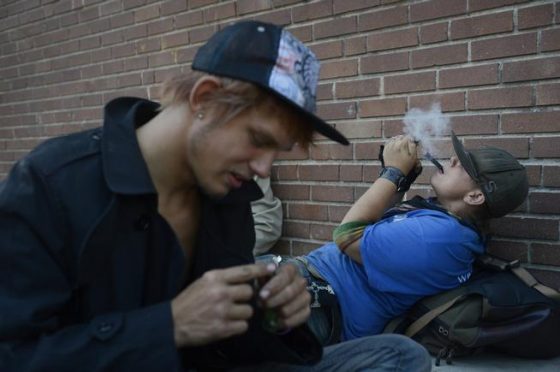 By Anthony A. Mestas, The Pueblo Chieftain

Pueblo Police Chief Troy Davenport said Wednesday that his officers are being told by homeless people regularly that they have come to Colorado for marijuana and some specifically to Pueblo because of the climate.

“They come to either extensively get jobs in the marijuana field or as it ends up, most of the time to just get marijuana,” Davenport said.

The chief disputed a study by Colorado State University-Pueblo’s Institute of Cannabis Research, saying it did not include the information he has had relayed to him from officers pertaining to homelessness and poverty.

The study said Black Hills Energy’s disconnection of service to thousands of power users was a key — if not the key — reason for the local homeless problem. Black Hills strongly disputed that conclusion, pointing out that the overwhelming majority of those accounts disconnected were reconnected, and that the factors for homelessness are varied.

Davenport said the department was not contacted for that portion of the study, but was contacted in other areas, including the section on crime and cannabis.

Researchers analyzed the results of 20 interviews with city patrol officers in June regarding their personal experiences confronting crime in the era of legal cannabis.

Davenport said his department needs to have a better way of tracking information about the possible connection between homelessness and the legalization of marijuana in Colorado.

“We are observing directly from talking to people that many people who are homeless came here so that they could get marijuana legally,” Davenport said.

“On top of that, I think that a situation has been created where people can grow marijuana here and it’s a very high quality because they don’t have to worry about it being confiscated or busted by law enforcement.”

Davenport said he is seeing cases in which people are shipping large amounts of marijuana out of state to other locations due to the markup that they can get.

Davenport said homeless people also tell officers that they come to Pueblo for other reasons.
“Our climate probably has something to do with it. Sometimes the perceived — and I would emphasize perceived — low cost of living is another reason and other benefits that they can get,” Davenport said.
“Sadly, sometimes there are people that end up homeless for other reasons. I don’t think that we can close our mind on those people who fall on difficult times and end up homeless, but what we are observing directly is that there is a cause an effect between marijuana and homelessness.”

Davenport said collecting data on the link is difficult, but the conversation about it is frequent and consistent.

“We do collect data and we are cognizant of the fact that we need to do a better job of collecting marijuana-specific data. We can tell you how many we have charged, but that number has probably dropped because it’s legal,” Davenport said.

“How do we document something that we don’t do because it’s legal? How do you quantify the resulting negative effect of positive effect if there isn’t?”

Davenport said he thinks the department can brainstorm how it can better collect that sort of social data.
“And maybe the police department is not the best place for that. Maybe a social service agency of some kind is the better place,” Davenport said.

“People may arguably be more open with people not wearing a badge.”

Michael Wakefield, CSU-Pueblo professor of management, told county commissioners Monday that his study on the economic impact of marijuana had similar encounters with homeless people saying they were here for marijuana.

“We did find that according to Anne Stattleman (director of Posada, an agency serving the homeless), up to 800 people in Pueblo might be here in cannabis-related issues. (Surveryors) said, why did they come? Their answer was, ‘Well because of marijuana.’” Wakefield said.

“They may come because of the accessibility. So it’s not people that were kicked out of their home that were from Pueblo, but it’s people that came to our community and they were homeless already. They may have also been trying to find employment, but unsuccessfully so.”

Wakefield said there could be 800 of these individuals that might be associated with cannabis that also are homeless.

“Adjusted for Pueblo cost of living, that is about $29,000 per homeless person,” Wakefield said.

“The estimated cost of cannabis-related homelessness to the taxpayers (in Pueblo) is about $23 million.”

According to the study, Pueblo received $35 million dollars of marijuana revenue in 2016. In the next five years, that number is expected to reach nearly $100 million.

“We’ve got a large plate of social problems. I don’t think that marijuana has made those problems smaller in number or easier to deal with. We are committed to delivering the best service that we can deliver,” Davenport said.

(162)
$11.48 (as of April 8, 2020 - More infoProduct prices and availability are accurate as of the date/time indicated and are subject to change. Any price and availability information displayed on [relevant Amazon Site(s), as applicable] at the time of purchase will apply to the purchase of this product.)

$19.99 ($1.25 / Fl Oz)
EFFECTIVE: 100% Pure Cold Pressed Hemp Oil provide... read more
(as of April 8, 2020 - More infoProduct prices and availability are accurate as of the date/time indicated and are subject to change. Any price and availability information displayed on [relevant Amazon Site(s), as applicable] at the time of purchase will apply to the purchase of this product.)

$18.99 $18.39 (as of April 8, 2020 - More infoProduct prices and availability are accurate as of the date/time indicated and are subject to change. Any price and availability information displayed on [relevant Amazon Site(s), as applicable] at the time of purchase will apply to the purchase of this product.)