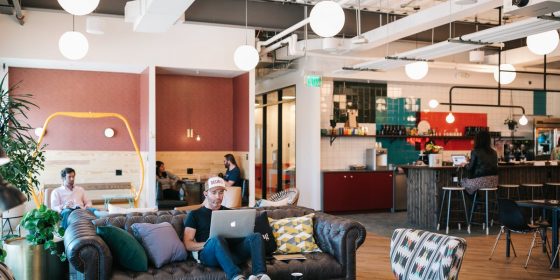 Marijuana tech firm MassRoots Inc. has relocated its corporate headquarters to a Denver co-working space after being evicted from its office space last month, the company’s CEO told shareholders Thursday.

The company is also eyeing a listing on the Canadian stock market and has a “renewed focus on fundamentals,” founder and CEO Isaac Dietrich said during a conference call with shareholders.

The update follows four months of internal strife at MassRoots during which Dietrich was fired and rehired; the firm filed a short-lived lawsuit against its founder alleging “serious misconduct”; a proxy battle was launched; the board of directors was overhauled; and the firm was evicted from its Downtown Denver headquarters.

The firm has raised $4.75 million via sales of stock to private investors, allowing the company to repay its debt obligations, Dietrich said Thursday. MassRoots is now posting monthly negative cash flows of under $200,000 per month, he said.

During the company’s most-recent quarter, which ended on Sept. 30, 2017, MassRoots listed liabilities totaling $2.66 million, according to regulatory filings made with the U.S. Securities and Exchange Commission.

The company’s current path, including an expansion into data-centric projects, could help return the company to a positive cash-flow, Dietrich said.

After shrinking to three employees, the firm now has five employees and is basing its operations out of a WeWork co-working facility in Denver, Dietrich said. The company’s corporate address is at WeWork LoHi, 2420 17th St., Dietrich confirmed in an email to The Cannabist following the call.

Since being founded as a marijuana social media company, the MassRoots (OTCQB: 41 cents) has expanded its focus to include offerings such as a dispensary finder; a customer ratings and review system; a menu management and online ordering service for dispensaries; point-of-sale services; and, most recently, blockchain.

Dietrich trumpeted a couple of MassRoots’ investments, one in cannabis law database CannaRegs and the other in marijuana media company High Times. MassRoots could benefit from Denver-based CannaRegs’ expansion into California, he said.

He also lauded how Canadian medical cannabis company Aphria has invested $950,000 in MassRoots during the past 18 months. The firm is also exploring the possibility of a listing on a Canadian stock exchange, he said.

“Aphria is the best partner MassRoots could ask for in the Canadian market, and we have a strong, synergistic relationship,” Dietrich wrote in response to an email query from The Cannabist. “Even if Aphria is forced to divest its shares in MassRoots, I do not believe it would have a material adverse effect on our stock or relationship.”

Catch up on the entire MassRoots story