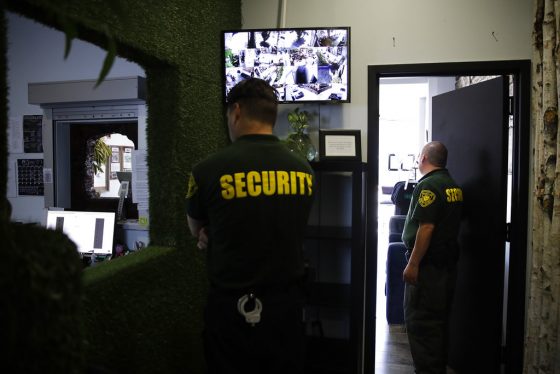 Despite the lowest unemployment rate since 2000, wages for American workers rose at a relatively tepid pace last year. For security guards, it’s a different story.

Average hourly earnings for employees in security and armored car services jumped 17 percent to $17.45 in the 13 months through November, compared with a 2.5 percent increase for all U.S. private-sector workers in the same period.

Why such big gains? Possible reasons include terrorism, marijuana and organized labor.

– Terror threats: The threat of mass shootings and domestic terrorism is driving demand for security in atypical venues, according to Steve Amitay, executive director of the National Association of Security Companies in Washington.

Amitay pointed to the 2012 movie-theater shooting in Aurora, Colorado, as an example. Other shootings in Orlando, Florida; Las Vegas; and a church in Sutherland Springs, Texas, suggest greater demand for armed security at public venues could rise.

“I don’t see there being, in the near future, any downturn for this industry,” Amitay said. The Colorado incident “was a real warning to other movie chains and other types of venues: If you don’t have adequate security you may not be able to prevent a terrorist attack from taking place, and if you don’t have any security you will be held liable,” he said.

Victims of the shooting requested hundreds of thousands of dollars in legal costs, alleging security weaknesses in the theater enabled the attack. The requests were eventually dropped.

– Pot security: Another hot area for security is pot. Dispensaries are popping up across the country as more states legalize marijuana. In Denver alone, there are 230 retail marijuana stores, according to the city’s website. That’s far more than Starbucks, which lists 50 retail locations in the area.

“The cannabis industry has created a lot more security officer jobs,” said Michael Julian, president of MPSI, a consulting firm in the cannabis industry. Dispensaries often pay their security guards higher wages than the industry standard due to the merchandise they protect, he said. Armored security vehicles sometimes escort the drugs and cash from the business.

– Labor gains: In California, Tiffany Dinkins credits her union for rising wages. Just a year ago, the ex-army officer was working two security jobs in San Francisco to provide for her family, including three children. But in recent months, Dinkins saw her pay steadily increase, finally creeping above $20 an hour, and she decided to focus on a single job as an ABC News security guard.

Dinkins said she saw a big change in wages when she moved to San Francisco from Atlanta and joined the Service Employees International Union, which has helped secure pay gains.

Working in California “was better because I had increases guaranteed,” with raises considerably bigger than the ones in Georgia, Dinkins said. “You go from 10 cents to someone giving you a dollar increase.”
security-pay