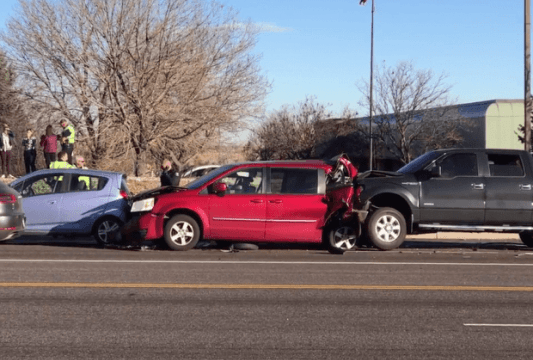 GOLDEN, Colo. — Colorado prosecutors have charged a man with vehicular homicide while under the influence of marijuana in a November crash that killed a woman and her three-year-old son.

An attorney for Cumsille wasn’t immediately available on Tuesday.

According to an arrest affidavit, Cumsille told police he “blacked out” and had no memory of the Nov. 13 crash. Cumsille voluntarily gave a blood sample and testing found 4.3 nanograms per milliliter of THC two hours after the crash, according to the affidavit. The legal limit is 5 nanograms.

Cumsille’s pickup truck was traveling 55 miles per hour when he approached a line of five cars stopped at a red light around 7:15 a.m. in Lakewood, according to the affidavit. The truck rear-ended one car, causing a chain reaction that damaged the other cars.

Anna Huffman, 43, died at the scene. Her three-year-old son was taken to a hospital and later died. A woman in another car reported a broken toe.

Colorado lawmakers created a marijuana DUI law in 2013, setting a limit for THC levels in the blood while driving in preparation for a constitutional amendment that made recreational marijuana legal in the state.

Lawmakers tried to address concerns that a limit would be unfair to some users, including people who use medical marijuana products. Defendants can argue that they weren’t impaired while driving despite the results of a blood test, unlike someone who tests above legal limits for alcohol.

Related: Is it safer to drive high than drunk? Efforts to curtail marijuana-impaired driving collide with attitudes, medicinal use

One Denver defense attorney who focuses on DUI cases, though, said the change made prosecutors’ job easier. Defendants have to convince a judge or jury that they were not impaired, despite the test results, and that can be difficult, said Jay Tiftickjian.

“With alcohol, there are probably over 30 years of studies that got us to the limits we have and the inferences we have,” he said. “With THC, in my opinion, it was a knee-jerk reaction that came before there was enough research to come to a conclusion about a scientifically valid number that can be used to try to prove impairment.”