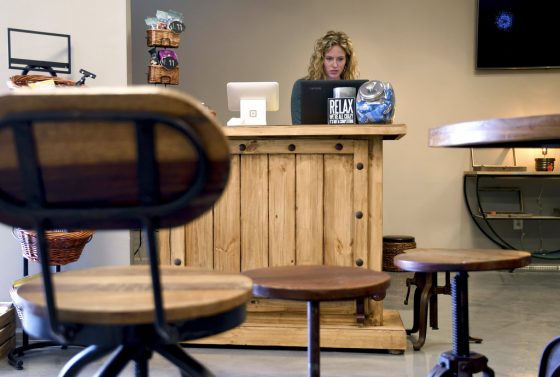 The city’s Cannabis Consumption Establishment allows adults to consume legal quantities of marijuana by vaping, dabbing or consuming edible products inside the venue. The shop doesn’t allow smoking, which is only permitted outdoors.

While private “consumption clubs” also have popped up recently in other parts of Colorado and Massachusetts, representatives from the Clark County Commission and Las Vegas City Council said valley jurisdictions will take a wait-and-see approach instead of joining in immediately.

“We need to figure out what impact these lounges will have on our community,” County Commissioner Chris Giunchigliani said. “We want to use Denver as a threshold to monitor what happens.”

Denver’s Tetra 9 Lounge opened a nonlicensed pot club charging monthly membership fees for those who wish to enter and consume the plant. The Summit Lounge, based in Worcester, Mass., did the same early last month.

Officials from both states have questioned the legality of the membership-only model, saying it operates in a gray area. Those clubs don’t sell marijuana; you have to bring your own to consume.

The Clark County Commission in September heard arguments from the Clark County Green Ribbon Panel to allow such lounges in the valley but decided to table its decision to early this year. While commissioners have not addressed pot lounges since, Commission Chairman Steve Sisolak has said a Jan. 4 memo from U.S. Attorney General Jeff Sessions encouraging U.S. attorneys in marijuana-legal states to enforce federal law on the plant would make valley officials even less likely to immediately allow the lounges.

Marijuana industry officials say lounges are needed in Las Vegas because visitors who legally purchase recreational marijuana here may not have a legal place to consume it. A lounge, which some proposals call for being attached to dispensaries, would eliminate the problem.

Giunchigliani said the commission would wait until the Nevada Legislature meets in 2019 in hopes that state officials pass legislation allowing for pot venues before moving forward at the local level. When state Sen. Tick Segerblom proposed such a bill in last year’s session, it was unsuccessful.

“You have to look at so many factors, especially driving under the influence and how people get in and out,” Giunchigliani said. “I just want to give businesses that have spent millions of dollars on their operations to have a true conversation in this next year and come up with a list of pros and cons.”

Las Vegas Councilwoman Michele Fiore was the lone council member to participate in a Dec. 13 workshop with more than 100 business owners and employees in Nevada’s marijuana industry. That workshop, run by Deputy City Attorney Bryan Scott and Deputy Planning Director Mary McElhone, included a proposed city ordinance allowing lounges by March or April of this year.

Further action on the city ordinance was also put on hold following Sessions’ memo. Fiore said she didn’t believe the memo was “a huge deal” but lack of clarity in Nevada law could unintentionally create “criminals” of local marijuana business owners.

“I would love to open (lounges) tomorrow, but I don’t want to jeopardize the people who have put millions of dollars and effort into doing the right thing with these businesses,” Fiore said. “It’s a slow process, and we have to make sure it’s completely figured out in Carson City.”

Nevada pot proponents said they remained hopeful marijuana lounges would find their way to the valley in 2018. While state law does not explicitly give permission for marijuana consumption lounges, legislative counsel Brenda Erdoes said in a letter to Segerblom in September 2017 that such lounges would be permitted as long as marijuana was not being used “unlawfully.”

Segerblom said that although he is disappointed his vision of Las Vegas as the first major U.S. city to open pot lounges did not materialize, Denver’s move to open such businesses was “a step forward” and could also benefit Nevada’s marijuana industry.

That step forward locally should include lounges where marijuana can be smoked, instead of only vaping, dabbing or using edibles like in Colorado, Segerblom said.