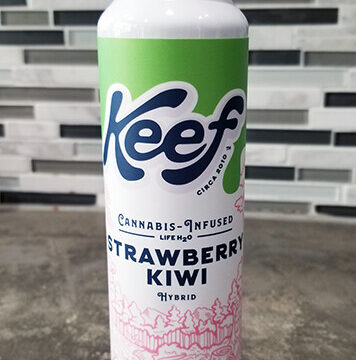 Keef Life H2O is a THC Infused low calorie and low sugar enhanced water that comes in three delicious fruit flavor combinations: Strawberry Kiwi, Cranberry Lime and Blueberry Lemon. All flavors are phenome-specific for a more functional and desired effect, and have less than 50 calories per bottle.

The Medical version contains 200mg of THC, while the Recreational version has 100mg.

I’ve seen different types of cannabis infused water available every now and then, and I usually try them when I see them. Saw this new Keef Life H20 at my dispensary the other day and decided to give it a try.

I have had other delicious beverages from Keef and I figured this was a safe purchase. At first I thought it might be using that new water soluble THC, but in actuality, its just standard cannabis oil. I still figured I was in for a treat.

The can is aluminum, so its protected from light, but that also means you cannot see the contents. I really like the cap, besides being childproof its intriguing design is also totally mess proof. Its also reusable – makes a nice water bottle.

After a good shake, the first pour revealed a beverage almost perfectly matching watered down grapefruit juice. It has a lightly fruity aroma that I could not really tie to either strawberry or kiwi (maybe grapefruit juice?), but nice all the same.

Also present is the faint hashy aroma that gets a little stronger when it warms up to room temperature. Its not overpowering, but it is present. The combination of the fruity scent and the cannabis reminds me of one of those tropical rum drinks.

After inhaling the bouquet for a few minutes I figured it was time to get to the all important “How does it taste?” question. My first sip produced mixed emotions.

At first there was a light fruity overtone to the Lifewater H20, but that was pretty swiftly obliterated by the bitter hash-oil aftertaste. Unfortunately for me, the aftertaste never really went away between sips.

My first observation was that this looked like grapefruit juice. If watered down, unsweetened bitter grapefruit juice is your thing, you have come to the right place because this is exactly what it tastes like.

While the taste may have been off putting, my previous experiences with Keef’s beverages told me that the effects should still be top notch, and they were. Within 30 minutes I could feel the warmth start to spread.

The Keef Lifewater H20 Stawberry Kiwi uses a Hybrid strain that left me fully functional and nicely energized. It was a great pre-hike beverage that made the woods look as awesome as I felt.

The effects lingered on for perhaps 5 hours before waning into the distance. I wasn’t tired or groggy, it was just a gentle return to normalcy. I was able to come up with some good ideas for future projects and still remember them, so that’s a plus.

The effects of the Keef Lifewater H20 was right where I expected from this reputable brand. The taste, however, was not what I would call very palpable. I can choke it down, but I need more sweetness to make it enjoyable.

Its a great addition to a smoothie, but the taste of it alone is a no-go for me. It definitely does the job after you get it down though. You know, shot glasses were invented for a reason, after all.

Whats yalls favorite thc drink? Most I tried don’t really taste good and I want to find one that tastes good.

I personally like Bubba Kush Root Beer the best.

wpDiscuz
2
0
Your questions and comments are welcome!x
()
x
| Reply