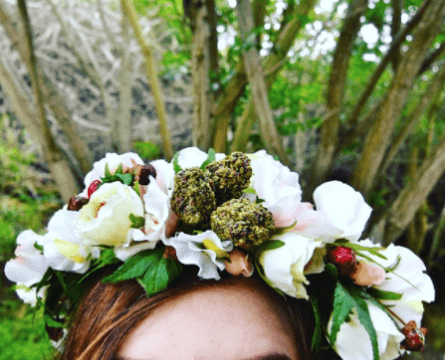 “A year ago, people would laugh at this,” howls Leslie Monroy, founder of Flowers on Flowers, which adorns its bouquets and floral creations with cannabis buds and leaves. “It would have been such a disaster.”

Monroy is riffing on her unique business during this past weekend’s Cannabis Wedding Expo, as she greets couples, event planners, and venue managers at her booth. UB40’s “Red, Red Wine” wafts in the background as the entrepreneur models one of her popular creations, an ethereal flower headpiece populated with multiple weed buds. She sits alongside a 10-foot floral canopy—blossoming with roses, lilies, and marijuana leaves—that’s gathered dozens of spectators taking selfies.

“This industry has gotten so much more fun,” explains Monroy. “People are more open to it.” 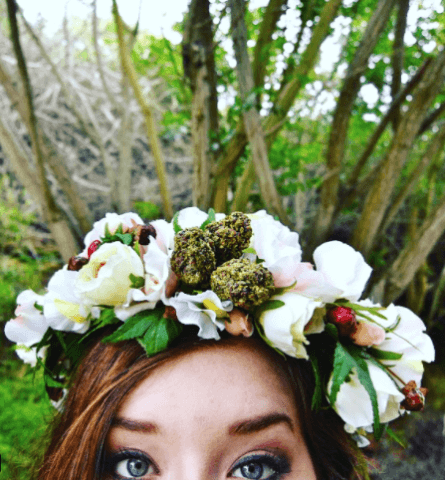 That openness fueled business growth for the two-year-old Flowers on Flowers. Sales tripled in 2017, and the California-based company just announced it sold out for the season after recreational pot in the state became legal in January.

This is just one of many success stories to be found at the expo in the ballroom of the iconic Sportsmen’s Lodge in Los Angeles. More than 30 vendors showcase how to infuse cannabis into one’s special day, be it through wedding cakes, tabletop linens, edibles, cocktails, centerpieces, or goodie bags. There’s even an all-inclusive cannabis resort in Jamaica hawking high honeymoons. 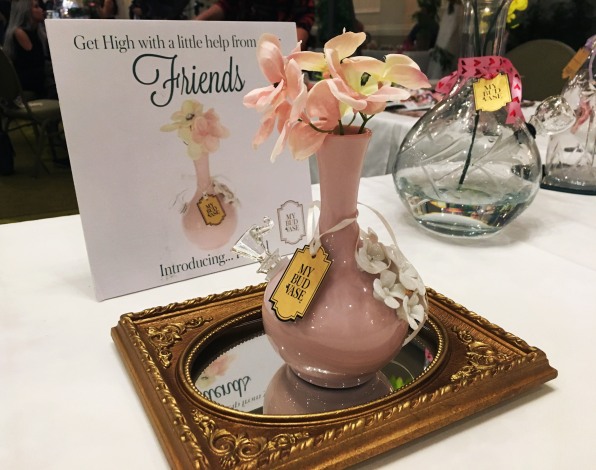 This is her third Cannabis Wedding Expo, where she finds more brides (and mothers of the brides) looking to take a hit in a classy, understated way. Her booth is flooded with customers, many of them women oohing and aahing at the craftsmanship.

“A lot of brides want them as bridal gifts,” explains Sullivan.

The L.A. event was the third expo this year; there were two others—one in San Francisco and the other in Colorado—in previous months. The expos aim to serve as a blueprint for the future of wedding conferences as the legalization of recreational usage expands.

The legal marijuana industry garnered $9 billion in sales in 2017, reports BDS Analytics. Combine that with the $55 billion U.S. wedding market, and the opportunities seem sky high.

“For 100 years, people have been stepping outside of the wedding to consume the joint,” says Cannabis Wedding Expo founder Philip Wolf. “But now, finally, you can present it with the wedding… there’s a lot of companies that are being established because it’s the emergence of two things that have never really been merged publicly.”

Wolf, who also runs an elevated cannabis dining series called Cultivating Spirits, was inspired to launch the expos after finding events spaces, and the wedding industry in general, resistant to weed. “You’d be surprised how many places aren’t cannabis-friendly,” laments Wolf.

He recounts how a fellow entrepreneur who specializes in cannabis bouquets complained that she was constantly denied a space at traditional wedding conventions. One, in fact, attempted to charge her double for a booth.

“I literally was just like effthat, let’s start her own expo,” says Wolf.

In 2016, Wolf presented the first Cannabis Wedding Expo in downtown Denver. Over 250 people showed up. Shortly thereafter, the event expanded to California.

At the expos, attendees get a chance to see how cannabis seamlessly ties into a special event. That can range from cannabis and wine-pairing rehearsal dinners to decor accents with marijuana leaves. One of the more popular ideas is that of a “bud bar,” where guests easily order a joint much like a beer or wine. It’s an industry Wolf’s Cultivating Spirits is rather familiar with; their dining events are big on the bachelor and bachelorette party circuit.

The expo also serves as an educational tool for those who are unaware of their respective state restrictions. Up until recently in Washington State, for example, a law forbade gifting or sharing with friends–it was considered distribution of cannabis.

There are little-known laws and nuances for cannabis weddings to be conducted legally in each state.

As recreational cannabis grows and gains political momentum, Wolf is confident his expo will touch new areas in the next few years. He already has his eye on Las Vegas and Boston as potential host cities. “The cannabis industry is going to be growing by billions every year for the unforeseen future,” says Wolf.

Wedding cake with a kick

Rachelle Harris, who runs a San Diego-based bakery called Got Sweetz, ventured into CBD oil-infused desserts less than two years ago. Although she spent nearly a decade in the traditional bakery goods space, she couldn’t ignore the significant uptick in customers who wanted a feel-good wedding cake. Her most popular varieties are chocolate Nutella and vanilla-strawberry puree.

“More people are excited to have something that they can finally eat and enjoy because it tastes good,” says Harris. At the expo, she set up several tastings with cannabis-curious couples. That’s in addition to triple the amount of the inquiries.

For Wolf, that’s what the expo is all about: Helping consumers discover the many creative ways cannabis can be enjoyed. “We have all these different categories represented, and you can come and be educated,” he says, adding, “in case you just want to smoke a joint before you walk down the aisle.”