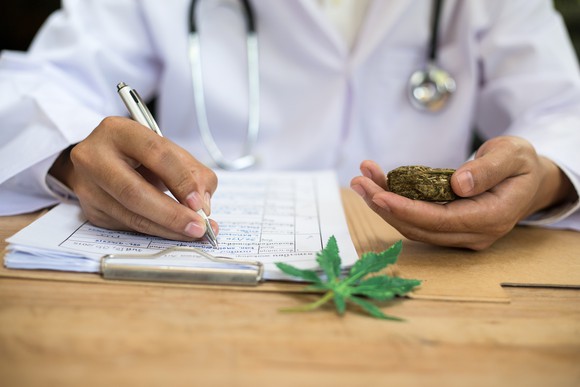 Now that marijuana’s available to any adult who wants to buy it, it appears marijuana cards are becoming less important. Colorado recently updated its marijuana sales for 2017, and as part of its data dump, the state acknowledged that its medical marijuana sales had dropped last year.

In order to get a medical marijuana card, individuals must have a qualifying medical condition, too. According to Colorado’s Department of Public Health and Environment, the qualifying conditions that allow a person to get a card in Colorado are cancer, glaucoma, HIV or AIDS, cachexia, persistent muscle spasms, seizures, severe nausea, severe pain, and PTSD. That’s a pretty comprehensive list, but it may be that many patients are avoiding an official medical diagnosis and forgoing the hassle associated with obtaining a medical marijuana card.

That has Matt Karnes of GreenWave Advisors thinking that medical marijuana cardholder data “will likely be indicative of further deterioration in medical market fundamentals.”

What does it mean?

Medical marijuana is paving the way toward widespread acceptance of marijuana use, but it could be that the passage of recreational laws is shifting some medical marijuana users out of the healthcare system. That could be a bad thing if it means that patients stop getting primary care that can identify other health concerns or treatment options.

Without reform at the federal level, the U.S. marijuana market will remain fragmented with few investment-worthy options trading on major market exchanges, such as the New York Stock Exchange. Instead, most of these small stocks will continue to trade over the counter on the pink sheets, which potentially subjects investors to a greater risk of fraud.

For now, investors interested in buying marijuana stocks should continue to focus on markets that are legalizing marijuana on the national level, including Canada. That country’s expansive medical marijuana market is fueling revenue and profit growth for a variety of companies, including Canopy Growth (NASDAQOTH:TWMJF) and Aphria Inc. (NASDAQOTH:APHQF). These Canadian companies are investing heavily in their grow facilities and an expected opening of a nationwide recreational market this year has industry watchers thinking the market could double.

Canadian marijuana stocks aren’t cheap, though. They’ve already attracted widespread interest among investors, and they’re valued richly relative to sales and earnings. These stocks have a chance to grow into their valuations, but if you’re concerned about paying up to buy them, another option is to buy a backdoor marijuana stock, such as Scotts Miracle-Gro (NYSE:SMG). While Scotts Miracle-Gro continues to get the bulk of its sales from fertilizer and pesticides, it’s investing heavily in hydroponics and those products are increasingly accounting for a bigger share of its revenue.