Marijuana is infamous for its gift of “the munchies.” But, cannabis can do much more than stimulate an anorexic’s appetite.

Ten months ago, my weight was in the double digits. I hated my body and I hated myself. I didn’t see any point in living. I began experiencing heart problems, causing a trip to Urgent Care and a diagnosis of anorexia nervosa.

Immediately, I felt my heart drop into my stomach — it was the first time I’d felt anything in my stomach for what seemed like years. I knew I might die, suffer permanent heart problems, and lose the opportunity to bear children, but I didn’t care. I still didn’t want to eat.

The National Association of Anorexia Nervosa and Associated Disorders estimates at least 30 million people of all ages and genders suffer from an eating disorder in the U.S. If that isn’t troubling enough, one in five anorexia-related deaths is by suicide. And for young females (15-24 years old) like me, the mortality rate associated with anorexia nervosa is 12 times higher than any other cause of death.

Following a great deal of hesitation after my diagnosis, I realized I wasn’t going to live if I kept doing what I was doing.

I had to make a change. I decided to get better.

A common misconception about anorexia is that it’s purely physical — people think you can just gain the weight back and be cured. However, anorexia goes much deeper than the desire to be skinny. For me, it was a deafening voice from within constantly hissing at me that I wasn’t good enough, that I could weigh less, that I definitely should weigh less. 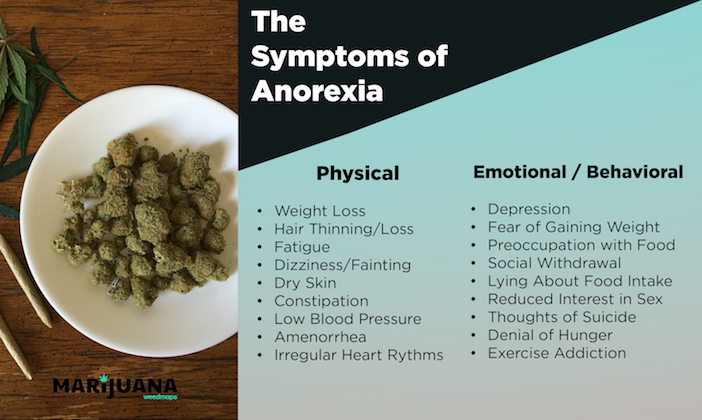 When it comes to symptoms of anorexia, I had a plethora. Thinning hair, constant fatigue, low blood pressure, amenorrhea — the list goes on. However, it was the emotional/behavioral symptoms that were most daunting. I was a happy child and, although I had my usual teenage rebellion phase, I was an overall happy teenager with an outgoing personality and a lot of friends. Anorexia stripped that from me. It turned me into a depressed, anxious, shy, rude, uneasy mess.

Based on the fact that my mind had been taken over by this disease, I was struggling with the emotions when I began to change my habits. I remember pacing around my house for an hour at a time trying to calm myself down long enough to snack on some cucumber. My father, a man who used cannabis to wean himself off prescription drugs following open-heart surgery, suggested I give it a try to help with my own process.

We all have neurons in our brains geared toward suppressing appetite. A Yale University study looking at the so-called “munchie” effect of cannabis concluded “the neurons we thought were responsible for shutting down eating, were suddenly being activated and promoting hunger, even when you are full. It fools the brain’s central feeding system.”

I began smoking cannabis regularly, opening myself up to a whole new attitude about food.

Without cannabis, I was judgmental, self-deprecating, and terrified. I remember pushing aggressively past my friend to run to the gym at 11 p.m. because I was so distraught over mistakenly eating an entire serving of oatmeal instead of the half-serving I thought I was getting.

But with cannabis, the thought of food wasn’t so unnerving. In fact, food began to taste good again. Eating began to feel how it did before I got sick — when I was a normal, healthy kid with an unapologetic appetite.

Food had begun to feel like the enemy, something I had to avoid at all costs. When I began using cannabis, I was able to strip my anxiety down and remember what food is: fuel for our bodies and a way to celebrate life. Nothing else.

Bonni Goldstein, M.D., a medical cannabis specialist, has evaluated thousands of patients and says many report an increased appetite as a medical benefit of consuming cannabis, particularly the THC-rich varieties.

“What I have found in my medical practice is that many who use THC feel hunger and report that food tastes exceptionally good,” Goldstein said in her book “Cannabis Revealed.”

Goldstein’s mountain of anecdotal evidence is supported by a study conducted at the University of Bordeaux in 2014. With the knowledge that cannabinoid receptor type-1 (CB1) increases odor detection, researchers administered THC to mice. Their data indicated “cortical feedback projections to the MOB crucially regulate food intake via CB1 receptor signaling, linking the feeling of hunger to stronger odor processing.” In other words, if your olfactory senses are heightened, your stomach is more likely to rumble.

Another study published in Nature Neuroscience found the CB1 cannabinoid receptor increases odor detection and, as a result, interest in eating among animal subjects.

But for many people diagnosed with anorexia nervosa, beyond the need for an appetite stimulant is the need to address clinical anxiety issues. As Goldstein wrote, in her experience, “THC-rich cannabis is used for anxiety, depression, appetite stimulation, gastrointestinal ailments, and nausea and vomiting” — all effects I experienced from my eating disorder.

Slowly but surely, I began meeting my minimum calorie/nutrient requirements for the day. I began to look in the mirror without seeing an 83-pound obese person. I began to see myself for who I was: a happy (for the first time in three years) young woman getting healthier and healthier by the minute.

Cannabis played a significant role in my physical recovery. It helped me gain an appetite, it reduced the pain from the severe bloating I was experiencing, and it gave me the energy to be active again. However, the area where it helped me most was my psyche. With cannabis, I was no longer “losing” by gaining weight — I was doing my best to get better. I was transforming into a healthy version of myself, and most importantly, I was proud to begin letting go of what was holding me back from my intrinsic happiness.