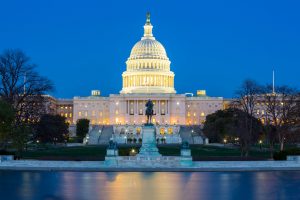 The only federal law that protects medical marijuana businesses from U.S. Attorney General Jeff Sessions’ Department of Justice has once again been extended for a short period.

The Rohrabacher-Blumenauer Amendment – which prohibits the DOJ from using federal funds to interfere with state MMJ programs but must be renewed annually – has been given its sixth lease on life by Congress under a stopgap budget deal passed Thursday.

The bill not only avoided a federal government shutdown, it extended the amendment until at least Jan. 19, when Congress must pass either another stopgap budget fix or an entirely new federal spending bill.

“Patients around the country who rely on medical marijuana for treatment – and the businesses that serve them – now have some measure of certainty,” U.S. Rep. Earl Blumenauer, D-Oregon, said in a news release.

“Our fight, however, continues to maintain these important protections in the next funding bill passed by Congress.”

This is the sixth time that Congress has passed what’s known as a continuing resolution, basically keeping the previous federal budget in place instead of hammering out a new one.

It’s a necessary step to keep the federal government funded and running over the holidays. The amendment – previously known as Rohrabacher-Farr – was first approved by Congress in 2014.

The ultimate fate of the law remains uncertain, since the House Rules Committee earlier this year prevented amendments like Rohrabacher-Blumenauer from being added on the floor during a full vote of the House; instead, they must be made at the committee level.

The Senate Appropriations Committee in response attached the Rohrabacher-Blumenauer Amendment to a spending bill that passed the full upper chamber. However, a resolution between the House and Senate budgets was never reached, making the discrepancy a moot point.

Few industry observers believe Sessions will crack down on the MJ industry, even if Rohrabacher-Blumenauer doesn’t survive past January.

If Sessions had made prosecuting cannabis companies a top priority, he could have gone after recreational marijuana businesses at any point in 2017. Unlike MMJ businesses – adult-use companies are not protected by the amendment.