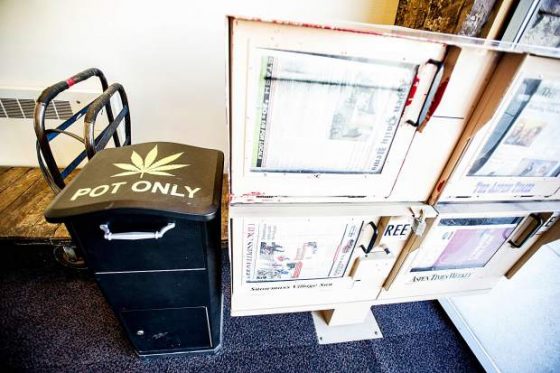 By Katie Shapiro, The Cannabist Staff

Spring break is in full swing at Aspen-Snowmass and while recreational marijuana has been legal since #SPRANGBREAK2K14, many a tourist are still first timers. Here are the essential do’s and don’ts to ensure your cannabis plans are copacetic this week:

Don’t: Be intimidated when walking into a dispensary

For newbies, it’s a lot to take in and hard to know where to even start. You’re not alone–especially in a resort town. Do know before you go to come with cash (some shops accept debit/credit cards), that the legal purchase limit is up to an ounce (28g) per day for out-of-state residents and 21+ IDs are required upon entry (and again at the counter). The only acceptable form of ID for foreign residents is a valid passport from your home country.

Do: Ask your friendly budtender for help

First stop after wheels down? Any one of six downtown dispensaries. We’re partial to Silverpeak (520 E. Cooper Ave., silverpeakapothecary.com) for its super knowledgeable staff and focus on consumption education. From finding the right strain for what ails you to how to operate the latest vaporizer, every customer receives one-on-one attention. And for out-of-staters, a “A Responsible Guide to Cannabis Consumption” pamphlet is included with purchase. FYI: Snowmass still has a moratorium on cannabis sales through October 2018.

We’re four years into this and still, smoking anywhere in public is illegal. The state is making strides though, with Denver regulators approving the nation’s first social marijuana-use license. Already open for business, we hope to see a similar concept to “The Coffee Joint” in Aspen, and soon. Also worth noting (but not strictly enforced), Aspen-Snowmass ski areas occupy federal land, where possession of marijuana is punishable by up to six months in jail and a $5,000 fine.

Do: Find a secluded park bench

Don’t tell ’em we sent ya, but pretty sure John Denver would be A-OK with sessions in his Sanctuary.

Don’t: Even think about smoking in your hotel room

The old towel-under-the-door trick doesn’t work–especially in a hotel that’s on high alert. Craig Melville, innkeeper at the Mountain Chalet, says that he doesn’t see an uptick in smoking violations during spring, but rather it’s increasingly been a challenge over the past few years.

“One thing we do notice is that when certain bands are playing the Belly Up, we’ve got a troublesome night ahead and are handing out fines,” he laughs. “Smoking marijuana is still obviously smoking and we’re a non-smoking hotel.”

As with every other hotel in town (fines vary), if you’re caught consuming in-room or on the balconies at the Mountain Chalet, you’ll see a $200 charge added to your bill. However, Melville adds, “It’s definitely not as bad as cigarette smoke and (the smell) clears out a lot faster. Vaporizing is a lot more difficult to detect.”

While the pickings are slimmer than in larger legal cities, a handful of cannabis-friendly Airbnb listings do exist in the area. The company continues to decline commenting on its stance, but there is a new “smoking allowed” filter to narrow down your search (just inquire specifically about cannabis with your potential host before booking). Can’t find one? A condo or home with ample outdoor space–and preferably a hot tub–will do.

Don’t: Spark up in the gondola

Whether you’re riding with a family of four or flying solo …show common courtesy to Skico and just don’t.

Do: Duck into one of Aspen-Snowmass’s infamous shrines for a session

Ski your way to the most epic of on-mountain safety meetings at any one of the shrines of Aspen-Snowmass. Hidden in the trees across all four mountains are hidden havens paying homage to the likes of Jerry Garcia (Aspen), David Bowie (Aspen), Jimi Hendrix (Aspen), The Beatles (Aspen), Hunter S. Thompson (Snowmass) and John Denver (Buttermilk). If you can’t find one on your own, ask a friendly local on the way up and always bring an extra party favor to leave behind for the next visitor. Sadly, “Joint Point” (Highlands) and the “Cough Lounge” (Snowmass) are long gone.

Traveling with marijuana is also still illegal–even if you’re going to and from a recreational legal state–but it’s been widely reported that TSA is increasingly turning a blind eye. That being said, why push your luck?

Do: Use the ASE amnesty box

One of Aspen’s many claims to fame? Having the country’s first-ever amnesty box at its airport.

Implemented by the Valley Marijuana Council with the help of the Sheriff’s Office in 2014, tourists can legally ditch their stashes before hitting the security line at Aspen-Pitkin County Airport. For Sheriff Joe DiSalvo, it remains one of his proudest pot accomplishments.

“We’ve done a great job here–how much the amnesty box still collects proves it. People come here for three days and they’re like kids in candy stores–buying an ounce and smoking all of it just ain’t happening.”

This column also appears in The Aspen Times. Katie Shapiro is a longtime cannabis-friendly Airbnb host.

Katie is the nation’s first-ever cannabis style writer here at The Cannabist and High Country columnist at The Aspen Times. Her company, Katie Shapiro Media, specializes in publicity for Colorado-produced films and film…