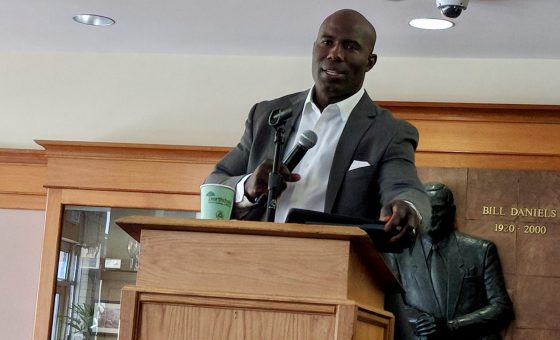 Colorado’s cannabis industry so white — but not for much longer.

Diversity is coming to the state’s marijuana industry, business leaders and social justice crusaders vowed at the Minority Cannabis Business Association’s first-ever Opportunity Summit held Friday and Saturday at the University of Denver. The new organization is determined that people of color — which currently account for only 1 percent of the thousands of licensed business owners in Colorado — will be left behind no longer.

“The reason we got involved (in cannabis legalization efforts) was because there were 11,000 people going to jail in Colorado, 800,000 people nationwide,” said Kayvan Khalatbari, MCBA chairman. “This was a social justice issue.”

Opportunities have been squandered to address social and racial equity issues within the cannabis industry and the community as a whole, he said.

“We’re not talking about how we reinvest in those communities,” he said.

“This needs to be a part of the conversation in every single state,” he said. “I don’t think it’s too late, but I think there’s definitely hurdles.”

The Opportunity Summit was designed to go beyond the traditional industry convetion with its sessions covering legal issues, labeling, marketing, business trends and market opportunities, Khalatbari said. MCBA also wanted to show young people and other people of color that people who look like them and grew up like them are succeeding in cannabis and other industries, he said.

“If you believe that. If you can believe you can be great. You can achieve anything you want to achieve.”

Davis, who said he doesn’t have a direct connection to the cannabis industry and declined to give interviews, delivered a motivational speech with a laundry list of lessons-learned from not making excuses and working hard to developing the habits of successful individuals like former Broncos teammates John Elway and Shannon Sharpe.

As a rookie, Davis was fearful of success and the “ROPE” that came hand-in-hand with it: Responsibility, Obligation, Pressure and Expectation.

“What I didn’t realize was, by me not accepting that, that I was doing my family, people behind me a disservice,” Davis said.