A former MLB pitcher and head coach of Texas Wesleyan University’s baseball team was fired today after being exposed for discriminating against a recruit based purely on personal politics.

Mike Jeffcoat, who pitched for four teams over his decade-long career in professional baseball, was hired by Texas Wesleyan University in 2002. Though his 529-358-1 record at the school while at the helm of the team is quite impressive, it was his inability to keep his political beliefs separate from the coaching duties that thrust him into the spotlight this week — ultimately costing him his job.

An email Jeffcoat sent to a high school player from Colorado was made public this week, exposing a questionable recruiting policy that Jeffcoat implied the school abides by. The email thanked Cherokee Trail High School senior Gavin Bell for his interest in playing for Texas Wesleyan, but informed him that “unfortunately, we are not recruiting players from the state of Colorado.”

The email went on to explain that “in the past, players have had trouble passing our drug test. We have made a decision to not take a chance on student-athletes from your state. You can thank your liberal politicians.”

Perusing the current roster for Texas Wesleyan, you’ll find that the majority of the university’s players hail from Texas, but one lone Coloradan suits up for the Rams. Jeffcoat’s allegation that players from Colorado “have had trouble passing” the team drug test cast shade on a single player from the state who has, thus far, maintained a clean public record. 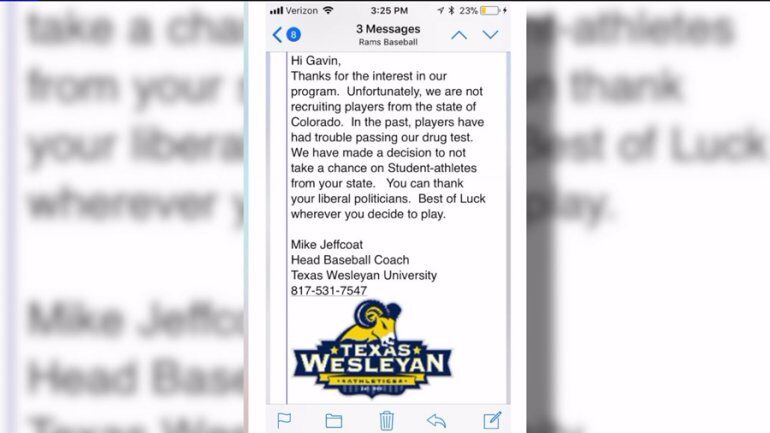 Despite Bell’s efforts to keep Jeffcoat from losing his job, the school held a press conference Thursday to address concerns about the issue and announce that Jeffcoat had been relieved of his coaching duties. According to the university, “the comments he made are in no way a reflection of Texas Wesleyan University, its values or its recruiting practices.”

“Mike Jeffcoat is no longer an employee of Texas Wesleyan University,” said Fred Slabach, school president of Texas Wesleyan. “He was separated from the university due to the discriminatory remarks contained in an email to a potential recruit from the state of Colorado and for another factor that we have been investigating for the last week. This additional factor is an NAIA (National Association of Intercollegiate Athletics) rule violation that has recently come to our attention.”