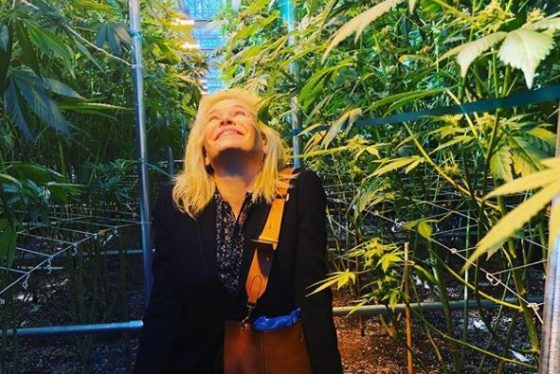 Another celebrity has announced plans to enter into the retail marijuana industry.

Comedian Chelsea Handler announced to her 3.3 million Instagram followers today that she plans to get into the cannabis business with her own line of marijuana.

“I want everyone to know that I’m going to a weed farm today. Yep. I’m gonna go pick a grow. It’s called a grow for those of you who are not in the know,” Handler said in an Instagram story posted around 9 a.m. PST.

“I’m going to come out with my own line of weed, I decided,” she said. “I want people to understand that you don’t have to get blottoed, you can just get a little, nice buzz to take the edge off.”

Handler, like a kid in a candy shop, continued to post videos from inside a so-far undisclosed grow in California.

“Just being a business woman and researching weed,” the comedian and talk show host said.

In true Handler fashion, she candidly made it political: “Weed is legal now in California and should be because it’s the only [expletive] thing that keeps me sane since Trump was elected.”

In her final post for the day, so far, Handler spoke directly to the smallest cannabis plants (commonly called clones) in the space, “Mommy’s home, little nuggets.”

Stay tuned for updates on Handler’s legal weed aspirations and what California grow operation will be involved.

Related: Chelsea Handler: ‘When I’m stoned, I don’t ever wanna do anything sexual’

Lindsey Bartlett is the social media producer at The Denver…