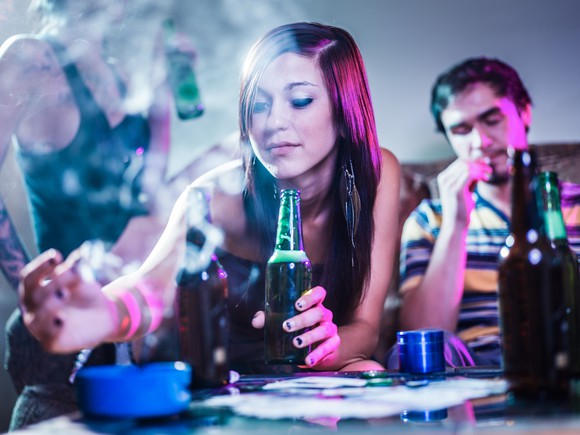 Long thought of as part of the reason for the beer industry’s falling sales, legalized marijuana may be what gets it growing again.

Although Boston Beer (NYSE:SAM) and distiller Brown-Forman (NYSE:BF-A)(NYSE:BF-B) have included notes in their annual Securities and Exchange Commission filings for several years now that legal weed could adversely impact demand for their beer and spirits, and while some surveys suggest a growing percentage of Americans would substitute marijuana for beer if it were legalized in their state, the relation between beer and weed is really not so clearcut that brewers should be worried.

In fact, because others have failed to find a “substitution effect” between beer drinking and marijuana usage, particularly if on-premise sales were included, rather than being beer’s downfall, marijuana could be what helps boost sales as the alcohol companies either buy into marijuana companies or put their products into drinks.

Suds and buds have been a natural pairing for some time now. Dad & Dude’s Breweria in Colorado, where marijuana has been legal the longest, has been successfully selling a cannabis-infused beer and Oregon’s Coalition Brewing has introduced several varieties of beer and cannabidiol (CBD), one of the more than 100 chemical compounds secreted by cannabis flowers that are found in both cannabis and hemp plants. It was the first brewer to make commercially available beer made with CBD and last year it produced Two Flowers IPA, an India pale ale made with hemp and CBD.

Heineken‘s (NASDAQOTH:HEINY) Lagunitas also introduced a limited edition ale called SuperCritical, which was made with terpenes, the aromatic oils of the cannabis plant, and Vermont’s Long Trail Brewing made a limited run IPA-like beer made with cannabis compounds.

Perhaps the closest any brewer has gotten to the marijuana industry is Constellation Brands (NYSE:STZ), which bought a 9.9% stake in Canopy Growth, a Canadian marijuana grower.

The next big move

So it’s not surprising analysts are beginning to speculate about which major brewers might be the next ones to invest in legal weed, with Anheuser-Busch InBev (NYSE:BUD), Molson Coors, and Diageo considered the obvious choices. Although it might not happen until marijuana is legal at the federal level — Constellation’s move is likely an outlier for the big brewers — it is something they’re undoubtedly actively considering.

According to analysts at Bernstein, domestic shipments for U.S. beer fell 2% last year. Anheuser-Busch lost in both volumes and market share, with its Budweiser and Bud Light brands slipping by as much as 7%. That’s in line with data from IRI, which found total U.S. beer dollar sales up 1.1%, but volume sales down 0.5%, with premium beer from the megabrewers down almost 4%.

Anheuser-Busch has shown it can adapt to trends (see how it started snatching up small craft brewers left and right), so as marijuana legalization spreads to more states, having A-B partner with a grower or introducing its own infused beer becomes more likely.

Crafting a response to marijuana

Lagunitas introduced SuperCritical last August and it quickly sold out, undoubtedly because it was a limited run, but also because it was a hit with beer drinkers– so much so that the brewer is planning another batch soon.

We’ll likely see a lot more such beer flowing out of the craft segment of the industry, but the megabrewers may latch onto the trend sooner than many expect as they try to get ahead of (or at least keep pace with) what’s likely to be a growth story. Instead of fearing legal weed, big brewers may find it’s the way to achieve the heady expansion they’ve been seeking.