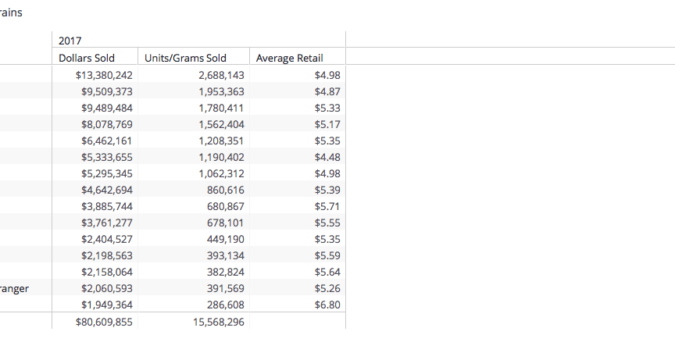 Cannabis strains fought across 2017 for consumer affection, and people inhaling deeply over aromatic jars and examining buds under big magnifing glasses in dispensaries across Colorado, Oregon and Washington chose their faves with their wallets.

And as it has been for several years, cannabis lovers in Colorado crowned Blue Dream as their queen, according to cannabis marketing firm BDS Analytics. Pot-swooning consumers in California, too, went especially ga-ga for the sativa-dominant hybrid Blue Dream. And those quirky Oregonians went their own way of course, embracing Gorilla Glue #4 with especial ardor. But they did not forsake Blue Dream — it was their second pick.

The strain markets in these states offer windows into the kinds of cannabis that smokers most appreciate. While strains often get identified for concentrates and edibles as well as flower, we looked closely at flower specifically to gauge what smokers were drawn to in 2017.

Coloradans spent $190.5 million on specific strains during 2017, which represents a 31 percent drop from how much they spent in 2016. The number of grams sold, too fell but not as dramatically: down 20 percent compared to 2016, at 34.8 million grams. The average retail price for a gram of something strain-specific was $5.46.

The lineup leads with Blue Dream, hitting $13,380,242 in sales, representing nearly $4 million more than its closest competitor, Durban Poison, at $9,509,373. After Durban, the competition is fairly tight for the different positions in the top 15 list.

Beaver Staters always go their way, including with strains. They crowned Gorilla Glue #4 as No. 1.

Oregonians dropped $107.5 million on strains during 2017, which represented a drop of 1.3 percent. Gram sales rose, though, by 10 percent, to 12.68 million. Normally sales in Colorado outstrip Oregon sales by a large factor, and the difference between dollars sold in 2017 is not dramatic. But the average price per gram tells the tale: It is $8.48 in Oregon, more than $3 more per gram than in Colorado.

Beaver State pot enthusiasts also preferred sativa to indica, but with less passion. In Oregon, eight of the stop strains were sative, two were 50/50 and five were indica.

Cannabis-crazy Californians spent the most, by far, on flower during 2017. And they also go nuts for Blue Dream.

Data for California begins in March of 2017, but the lack of two months of sales data does not knock California out of its comfortable position — at the top of the mountain. Golden Staters spent $518.65 on cannabis between March and December last year, well more than double sales in Colorado for the entire year. But California marijuana is also rather expensive — the average price for a strain-specific gram of flower was $9.34.

Blue Dream’s marketplace is most resounding in California, where consumers spent $23,322, 645 on the strain; the second-place strain, Girl Scout Cookies saw $11,032,388 in sales — less than half.

The Sativa-Indica battle ends the same as the rest of the states — sativa wins. California splits the difference between Oregon and Colorado, with 9 sativas, 5 indicas and one 50/50 hybrid rounding out the top 15.