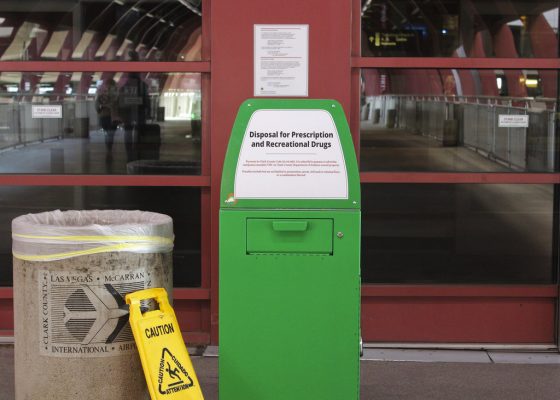 Travelers departing Denver International Airport have received the message “loud and clear” that they’re not supposed to fly with marijuana, airport officials say.

The incidents of Transportation Security Administration officials discovering marijuana on passengers are so few and far between that DIA stopped tracking those contacts and sees no need for so-called “amnesty boxes” in which flyers can dispose of their federally illegal weed, said airport spokesman Heath Montgomery.

But in the four-plus years since Colorado initiated adult-use cannabis sales, DIA has been “very successful with not having to do that,” Montgomery said of the secured disposal bins.

DIA banned marijuana possession, consumption and use on the expansive, 53-square-mile airport property at the time Colorado implemented legal recreational marijuana sales in January 2014, Montgomery said. Signs were installed to inform people of the airport’s regulations and also to remind them that marijuana remains federally illegal and, as such, can’t be taken on planes.

In January 2015, DIA banned the sale of marijuana-themed souvenirs to enforce that message.

“I think people got the message loud and clear that they were not supposed to fly with the drug,” Montgomery said.

In the first couple of years after legalization, DIA saw about 30 to 40 incidents out of 50 million-plus passenger trips, Montgomery said. Last year, the airport saw a record 61.4 million passengers, yet the number of those flyers found with marijuana continues to be “minuscule” to the point it’s not worth the police officers’ time to draft up incident reports, he said.

If TSA officials find marijuana on a passenger, they contact Denver Police officers who then determine if the amount found was for the passenger’s personal use or large enough to be considered illegal trafficking. If the former, the passenger is informed of the airport’s policy and given the option to throw it away or return the product home.

There are trashcans at TSA checkpoints where people can dispose of restricted items, including marijuana.

DIA has seen success with the rules in place, Montgomery said.

“At a higher level, people just understand they’re not supposed to fly with marijuana,” he said.