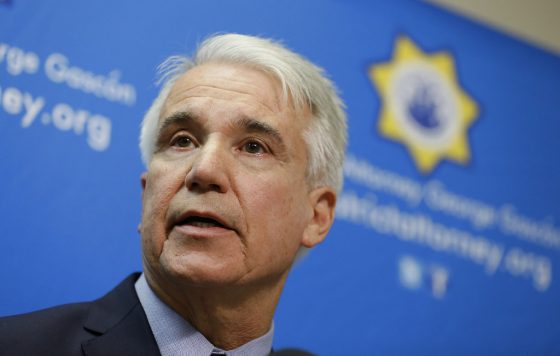 By Paul Elias, The Associated Press

SAN FRANCISCO — With pot now legal in California, prosecutors in San Francisco and San Diego are moving to erase thousands of marijuana convictions en masse, a step that could prove life-changing for some and could especially help minorities, who were more likely than whites to be arrested for such crimes.

“We want to address the wrongs that were caused by the failures of the war on drugs for many years in this country and begin to fix the harm that was done not only to the entire nation but specifically to communities of color,” said San Francisco District Attorney George Gascon.

Advocates are calling on more counties to do the same.

“That’s awesome. It’s wonderful and appropriate,” said Josh Freeman, a marijuana farmer who recently had his felony conviction for selling small bags of weed at a reggae concert reduced to a misdemeanor.

Freeman can now obtain permits to grow marijuana legally, something he couldn’t do with a felony record. He can also legally buy a gun and take up hunting again, he said.

In addition to being barred from owning guns, felons cannot vote and are disqualified from holding many professional licenses. Also, people with felony convictions often have difficulty finding work and housing.

Californians voted in November 2016 to legalize recreational marijuana and abolish a host of pot-related crimes. California is among eight states that allow adults to use pot recreationally. The federal government still considers marijuana illegal.

California’s measure applied retroactively to hundreds of thousands of cases, but people who wanted to get their convictions erased or reduced had to petition the courts themselves. And fewer than 5,000 people have gone through the time and expense involved.

Freeman, for example, hired an attorney to get his Monterey County conviction reduced, and it took several months and repeated visits to the court.

As a result, Gascon announced on Wednesday that his office will review nearly 8,000 cases dating back to 1975 and that prosecutors will seek mass dismissals and reductions. Gascon said just 23 people filed petitions in San Francisco last year.

The National Conference of State Legislatures said nine states have marijuana laws that let people clear or modify their records.

African Americans and other minorities have been arrested for marijuana crimes at far higher rates than whites, and as legalization spreads, states and cities are trying to redress that inequity.

Across the San Francisco Bay, for instance, Oakland has set aside a number of marijuana sales permits for minorities convicted of specific pot-related crimes and requires some stores to be opened in low-income neighborhoods hard hit by arrests.

“It was a huge relief,” said Ingrid Archie, a 37-year-old black woman who may have been the first person in the state to petition a court to reduce a felony marijuana conviction.

Archie was sentenced to three years in prison after police seized a pound of pot from her home. Four hours after the polls closed on election night in 2016, Archie said, she emailed her petition to a judge. Three months later, her marijuana conviction was turned into a misdemeanor.

She now works for the Los Angeles nonprofit group A New Way of Life, which campaigned for legalization and helps those released from prison resettle in the community.

Archie said more counties should follow San Francisco’s and San Diego’s lead and take it upon themselves to throw out or reduce convictions.

So far, 680 cases in all have been dismissed or reduced in San Diego, Stephan said.

Groups like the Drug Policy Alliance, which advocates broad marijuana legalization, and county public defenders have organized legal clinics throughout the state to encourage people found guilty of pot offenses to petition the courts. They have had limited success.

The Hood Incubator, an Oakland nonprofit aimed at boosting minority participating in the marijuana industry, has hosted several clinics. Co-founder Lanese Martin said about two dozen people have attended the clinics but none came back for the portion on clearing their records.

“It’s huge that San Francisco is doing it automatically,” Martin said by email. “It removes huge barriers for folks trying to navigate the process of getting their life back from the bureaucracy.”