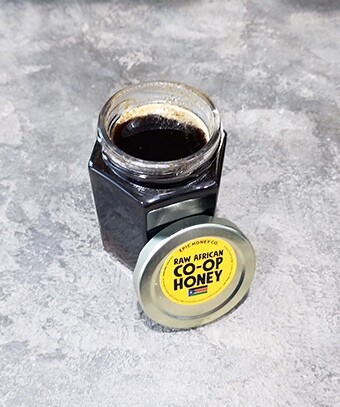 Two of my most favorite things in the world are Honey and Cannabis. It seems like a no brainer to me that the combination of the 2 would be out of this world! Being that there are so many different varieties of both Honey and Cannabis, you can really experiment to get the exact flavor profile that you are looking for.

Wherever I am, when I see a Honey store or stand, I find myself gravitating towards it like a magnet. I have yet to meet a honey I didn’t like (well…besides the runny stuff in the grocery store), although there are some that really shine and stand out over the others. My top 5 list has pretty much been the same for the past few years until this week. I recently obtained some honey that has catapulted itself to the top of the heap by a wide margin!

A few weeks ago, I stumbled upon the Epic Honey Company who had made available some Raw African Honey! This is not the only type of honey that they sell, they have multiple options available, but it was something rather obscure that I had not yet experienced, so I purchased an 8oz jar to test.

This stuff is beyond amazing! Its very dark in color and exhibits both the taste and aroma of dark molasses. The flavor profile is indescribable – Its like no other honey I have ever tasted. Not runny and syrupy sweet like the grocery store stuff, this thick honey has a very complex taste that is reminiscent of a fine, oak aged Cabernet Sauvignon .

This Raw African Honey is harvested by South Sudanese beekeepers of the River Nile International Cooperative exclusively for Epic Honey. These bees foraged on flowers and forests growing out of the red, iron-rich soil of Kajo Keji, South Sudan. The honey is 100% raw; You get it just the way the bees made it.

Immediately after having my first spoonful, I realized that this was going to be the perfect honey for a cannabis oil infusion! My mind was already racing with the strain choices that would perfectly match this flavor profile, and I immediately settled on Hindu Kush. In my mind, the earthy flavors of Hindu would really blend well with the earthy sweet taste of the African honey.

Wasting no time, I grabbed my hotplate, a Pyrex beaker, and my top mixer to prepare them for the infusion process. I emptied the 8oz jar of honey into the beaker and added 2 grams of Hindu Kush cannabis oil that was obtained via a QWET extraction. The aroma of the 2 in the beaker together was already mouthwatering!

I set my hotplate to 90 degrees F. and setup my mixer with a small paddle attachment. I slowly heated the honey until it reached the 90 degrees and engaged the stirrer, setting a low rpm stir to blend the warm honey and the cannabis oil together for 60 minutes. If I could accurately portray the aroma emanating from the beaker during this process you would be drooling over your keyboard or phone right now…it was that good!

After an excruciatingly long 60 minutes, I removed the stir paddle and promptly licked it clean. At this point, I had not yet even thought about the dosage I was receiving from this – I started doing the math about 30 minutes into it and figured I had consumed about 40-50mg of THC. By the time my math was done, I was already beginning to feel the warm fuzziness beginning to take over my body. The feeling was just as beautiful as the taste. 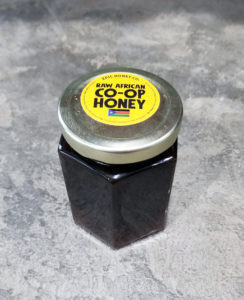 This batch came out to be about 45mg per teaspoon, which is the perfect dose for me. Although I prefer to just eat the infused honey plain, I have since found that it goes well with many different types of tea. If you like to barbecue, add a few teaspoons of this honey to your barbecue sauce for an easy infused dinner! I made a fabulous BBQ sauce that I made for pulled pork sliders I served at a party; they were all gobbled up instantly – definitely a big hit!

If you are like me and really love honey and Cannabis, you absolutely MUST get some of this Raw African Honey! It is a limited edition run, so If you want to experience it for yourself, you need to go get it NOW. Once it’s gone, it’s gone. Thankfully, the Epic Honey Company also has an outstanding lineup of other delicious honeys for you to procure including other unique honeys like Mamey Sapote, Desert Mesquite, and Coffee Blossom to name a few!

It is also worth mentioning that all the profits from this honey are donated to the American HoneyBee Protection Agency to support the safe rescue, relocation, and rehabilitation of wild honeybees. Every $10 you spend with Epic Honey Co. saves around 2,500 bees! Now you can have both the greatest honey in the world and also sleep well knowing that you are helping to sustain the bee population.

Don’t wait, head over to the Epic Honey Company right now to secure your jars before they are gone!

The Vanishing Half: A Novel

(8)
(as of June 4, 2020 - More infoProduct prices and availability are accurate as of the date/time indicated and are subject to change. Any price and availability information displayed on [relevant Amazon Site(s), as applicable] at the time of purchase will apply to the purchase of this product.)

(81)
[ Suitable Material ]: This balaclava is made of 1... read more
(as of June 4, 2020 - More infoProduct prices and availability are accurate as of the date/time indicated and are subject to change. Any price and availability information displayed on [relevant Amazon Site(s), as applicable] at the time of purchase will apply to the purchase of this product.)

(121)
Live the mercenary life with the Xbox Wireless Con... read more
(as of June 4, 2020 - More infoProduct prices and availability are accurate as of the date/time indicated and are subject to change. Any price and availability information displayed on [relevant Amazon Site(s), as applicable] at the time of purchase will apply to the purchase of this product.)

Awesome, Im gonna order some of that! Do you have to use a mixer or can I just warm it and stir with a spoon or something?

Hi Mark, you can mix with a spoon, just make sure that you mix it long enough to obtain an even dispersion

Does the honey come infused or did you infuse it?

No the honey did not come infused, that was something I did on my own.

wpDiscuz
4
0
Your questions and comments are welcome!x
()
x
| Reply