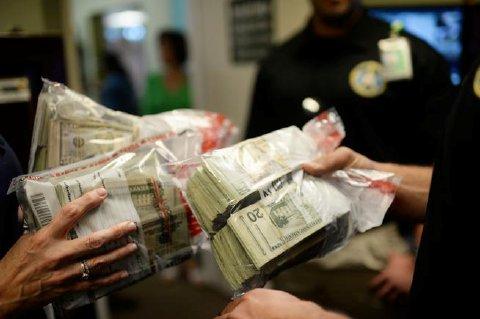 WASHINGTON — Stung by robberies in California, Colorado, Washington and other states, the cannabis industry is pressing Congress to change federal banking laws so that its retailers no longer have to carry and process large amounts of cash.

Yet lacking the lobbying muscle of their adversaries, the industry hasn’t gained much traction on Capitol Hill, leaving cannabis business owners and their employees vulnerable to thefts and violent crime.

GOP lawmakers from pot-unfriendly states have sidelined legislation in the House and Senate that would allow marijuana businesses to conduct transactions with federally regulated banks. These also include state and community owned banks that are part of the Federal Reserve System.

In another blow for the industry, Attorney General Jeff Sessions last month made it easier for federal prosecutors to enforce federal marijuana laws in states that had legalized the drug. The announcement caused stock prices for pot companies to plunge, and prompted many financial institutions to become even more wary of conducting business with marijuana enterprises.

Michael Correia, a lobbyist for the National Cannabis Industry Association, said there are strong law-and-order arguments for allowing marijuana businesses to bank like others do. They’d no longer need to conduct transactions in cash, including paying employees, could more easily pay their taxes and could separate themselves from the illicit marijuana market, he said.

But according to Correia, the GOP leadership in Congress has shown no interest in even holding hearings on the SAFE Banking Act, legislation that would free banks to conduct business with state-approved marijuana growers and retailers.

“It is very frustrating,” said Correia, who previously worked for U.S. Rep. George Radanovich, a California Republican who retired in 2010. “The leadership of Republican Party are old school people and do not support this legislation. We haven’t gotten any movement to this point.”

For the cannabis industry and states that have legalized marijuana, the stakes are considerable. Cannabis businesses generate about $8 billion in annual revenues, a figure that is projected to reach $24 billion by 2025, according to New Frontier Data, a D.C.-based analytics company that monitors the industry. An estimated 70 percent of cannabis businesses have no relationship with a financial institution and thus use cash for all transactions, including salaries for employees.

All those greenbacks are potent targets for criminals. Last month, a pair of thieves beat and robbed a courier carrying $9,000 in cash from San Diego marijuana businesses. In Washington state, police have reported multiple robberies, including one in September when a marijuana shop employee was shot and injured by thieves.

In Aurora, Colorado, police are still looking for two assailants in connection with the killing of a Marine veteran during a marijuana dispensary robbery in 2016. The Marine veteran, Travis Mason, worked as a security guard at the dispensary and died of a gunshot wound to his head.

Marijuana proponents say a change in federal banking laws would protect public safety, but opponents are pressing members of Congress to reject the SAFE Banking Act.

“This chaos is all so predictable,” said Carla Lowe, founder of Citizens Against Legalizing Marijuana, one of the groups that fought the 2016 passage of Proposition 64, California’s legalization initiative. “This industry is a lawless industry. … All of their money is illegal, and it should stay illegal.”

The cannabis industry’s reliance on cash is also complicating tax collection efforts. In California, Proposition 64 was sold to voters with the projection it could generate more than $1 billion yearly in state and local tax revenues.

Yet for government agencies, it is harder to track sales from all-cash businesses than it is for those who rely on credit cards, and it becomes tougher still when those businesses can’t use banks. To pay their taxes in Sacramento, some 30 city-approved marijuana shops have to stuff cash into backpacks and duffel bags and haul it to a set location each month, kept secret for security reasons.

“It is a far-from-ideal setup,” said Joe Devlin, Sacramento’s chief of cannabis policy and enforcement. “When someone comes in to pay a parking ticket in cash, that is one thing. When someone is coming in paying $30,000 in taxes, it is something else.”

Over the last decade, the cannabis industry has devoted much of its political spending toward passage of state legalization and medical marijuana laws. It helped raise $25 million in support of passing Proposition 64, compared to only about $2 million raised by opponents.

Inside the D.C. beltway, the money influence is reversed. Opponents of marijuana legalization — such as the National Fraternal Order of Police and other law enforcement groups — spend millions of dollars each year on lobbying and campaign contributions, far more than pro-cannabis groups, such as the National Organization for the Reform of Marijuana Laws.

One of the most powerful opponents of marijuana legalization is casino magnate Sheldon Adelson, who has spent more than $190 million since 1989 on contributions to presidential candidates and members of Congress, nearly all of them Republicans, according to the Center for Responsive Politics.

The industry is working hard to enhance its clout in Washington, but it hasn’t been easy, said Khurshid Khoja, a California lawyer who represents numerous cannabis businesses.

“It’s only in the last few years we haven’t been treated like a joke,” said Khoja, founder of Greenbridge Corporate Counsel. During past lobbying days at the Capitol, he said, cannabis industry advocates could only meet with staffers in the hallways, and routinely had to endure quips about being the “stoner” lobbyists.

“Last year we actually got to meet with members of Congress,” Khoja said. “It’s an indication of the progress we have made.”

The industry can count some GOP friends in Congress, including Matt Gaetz from Florida, Dana Rohrabacher from California and Virginia’s Tom Garrett, who introduced legislation this year to decriminalize marijuana. Another key Republican is Sen. Cory Gardner of Colorado, who opposed his state’s 2012 legalization of marijuana but has criticized Sessions’ January directive to U.S. attorneys. For the last month, Gardner has retaliated against Sessions by blocking appointments to the Department of Justice.

For the SAFE Banking Act to be enacted, however, it would have to get through the House and Senate banking committees. Both are chaired by opponents of marijuana legalization — Rep. Jeb Hensarling of Texas and Sen. Mike Crapo of Idaho. Advocates see little hope the legislation will go anywhere this year, and are examining alternatives.

California is one state that is studying creation of a public bank to serve the marijuana industry. But the proposal faces numerous hurdles, including a potential start-up subsidy that the state treasury and taxpayers would have to bear.

The 2018 midterm elections could boost the prospects for federal banking reform. Hensarling is not running for re-election, meaning there will be a new chair of the House Financial Services Committee. There’s also a chance that Republicans could lose their majorities in one or both chambers of Congress.

“Democrats have proven to be far more friendly to reform efforts and ending prohibition,” Khoja said.