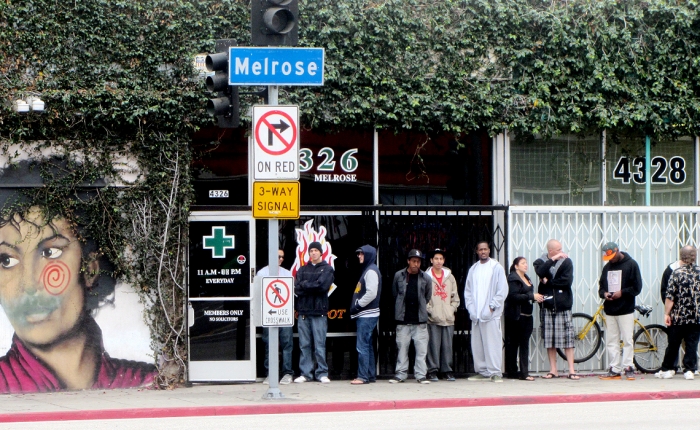 I’d asked her about the impending legalization of cannabis in Los Angeles, and right away she launched into a rant, gesticulating wildly.

“I got into this to help people,” she said. “I might as well just go back to working at the bar. I think I might. I think I’m just going to quit.”

The budtenders around her stayed silent, clearly uninterested in risking their jobs over some speculation about the future.

For the most part, the budtenders I’ve asked about legalization have all responded similarly, if not in the same emphatic manner. Most folks are expecting the worst: the overtaking of medical facilities by recreational ones. Lots of budtenders got into the business to take care of people with medical conditions, and the idea that vice and medicine will coexist seems to worry them.

Los Angeles is not the first place to have to deal with balancing medical and recreational markets. Graduate students at U.C. Davis, Emory and Yale decided to take a look at Colorado and Washington’s legal markets to see how their medical sectors fared, and they created a model to see into the future and predict what will happen in newly legalized states like California. The results uncovered a surprising power dynamic with voters, not customers, at the helm.

There are two options for existing medical marijuana (MMJ) dispensaries facing resource competition with recreational ones. They can either integrate “salient features” from recreation into their business or distance themselves from recreation “by accentuating the distinctiveness of their existing [medical] position.”

Business factors abound for both options. Places that stay focused on medical marijuana tend to maintain a good relationship with locals and their existing customer base, reinforcing a narrative of legitimacy that is popular among even those who don’t support recreational cannabis.

They can more easily avoid the high taxes and stringent regulations that accompany recreational pot, meaning lower prices for patients. From a social standpoint, part of staying medically focused might have to do with a legitimate desire to care for patients.

As for focusing on recreation? While it threatens a medical customer base, it also opens up a whole other level of consumer—the kind who are more interested in products offered at a dispensary than they are in the medicinal qualities of cannabis. More consumers—especially ones interested in higher-priced specialty products over flower—means more money for commercial dispensaries. Economies of scale are the cost-cutter here since growing larger amounts of cannabis or manufacturing more products ends up making the production cost of each unit cheaper.

While financial decisions are usually sufficient enough to determine a business plan, pot is different. It is contentious on a community-by-community basis, it is illegal on a federal level, and it is simply not your typical market. As the study points out, a number of external sociopolitical factors are in play when it comes to marijuana—both within and outside of the industry. What a dispensary will do, it turns out, depends not as much on customers as it does on what the local voting public thinks.

Weed is what you’d call a “contested cultural market” where, explains the UC Davis study, “market producers [craft] narratives affirming the legitimacy of their specific organizational practices and activities [as being] ‘within a morally favored taxonomic category.’… Organizational actions are strongly influenced by the desire to be seen as socially appropriate.

By adopting features aligned with the cultural and normative structures shared by a community, organizations gain legitimacy. Changes in these features may violate the premises upon which existing resource relationships have been established… [MMJ dispensaries’] responses are shaped not only by the intensity of resource competition posed, but also by concerns with identity, legitimacy, and reputation.”

The research explains that, in places with low voter support for recreational cannabis and a high density of recreational dispensaries, medical dispensaries tended to stay medical. Rather than bucking the status quo, these dispensaries often participated in local politics and charity (the famous dispensary Harborside in Oakland, California performs extensive community outreach).

When there’s a “social movement [of] boycotts” of organizations with lower “reputational standing,” (i.e., recreational dispensaries) medical marijuana stays that way, becoming “responsive to concerns with maintaining legitimacy within their voting communities.”

And vice versa: High voter support with lots of recreational dispensaries around means the MMJ spots are likely to become recreational. It makes sense considering the locals wouldn’t get upset and the dispensary would be open to more business.

Angelenos are particularly anxious about the survival of medical cannabis, and perhaps rightly so. Support for Prop. 64, California’s recreational legislation, was at 59.5 percent in Los Angeles. And while not as high as in counties like Alameda and San Francisco, this is still an approval level that suggests medical dispensaries in Los Angeles will likely trend towards becoming recreational. For a place that has had medical cannabis since 1996, this could mean a sea change in the patient-focused market as a whole. Histrionic though the budtender I spoke to seemed, she might have had a point.

The opinions of communities with low levels of recreational support override even consumer preference. “In locations where voter support for recreational cannabis legalization is weak, medical cannabis dispensaries… emphasize their medical focus [even] when their existing clientele displays greater recreational orientation.” Somehow, saving MMJ has fallen on the shoulders of the voters who want to keep recreational prohibition going.

It doesn’t have to be that way, though, if recreational pot smokers do their due diligence in keeping medical operations going. Instead of depending on those who are anti-recreational to sway dispensary decisions, customers can mobilize their power as voters to introduce and encourage local legislation protecting medical cannabis. If dispensaries won’t respond to them as consumers, they certainly seem to hear people as voters loud and clear.

If the culture of local politics dictates participation in MMJ and social engagement, then medical dispensaries will have to respond in kind. Protecting patients comes alongside a host of other political concerns that cannabis smokers need to agitate for: releasing Drug War prisoners, changing scheduling of cannabis on a federal level, diversifying the industry and stopping non-violent drug arrests, for example.

It shouldn’t be the fear of being over-regulated or shut down that keeps medical facilities patient-focused; it should be a basic desire to have both medicine and recreational markets run simultaneously. High-approval areas have a responsibility to be aware that their zealousness, though obviously crucial in ending prohibition, needs to come with a plan to keep the medical market alive. Medical and recreational dispensaries are two separate beasts with two different focuses.

It’s crucial to remember that patients need continued access to medicine in their communities, even as people are having fun smoking recreational pot. There’s no excuse now that we know how these markets play out. Being some of the first people to have the chance to experience a world without prohibition means we have a responsibility to those who will follow.