Police in Colorado and California are using tests to see if drivers are high on marijuana. But more exact testing is needed as more states legalize the drug.

As marijuana becomes more available to Californians and additional efforts to legalize it move forward in other states, law enforcement may face a challenge in identifying drivers who are high.

Alcohol is simple. A higher concentration in the bloodstream means more impairment and a higher likelihood of accidents.

But the level of intoxication associated with a given THC blood concentration depends on many variables — how marijuana’s ingested, whether someone is a regular user, the level of THC in the dose, and whether they’ve ingested other drugs or alcohol.

That makes it infeasible to set a single blood alcohol content (BAC) level as is set for alcohol, according to a new research paper.

And, the paper says, because THC can spike and leave the bloodstream in less than three hours — despite impairment potentially lasting six to eight hours — a blood test taken an hour or more after a traffic stop may fail to identify impairment due to marijuana use.

“There is no one blood or oral fluid concentration that can differentiate impaired and not impaired,” Marilyn Huestis, PhD, the paper’s co-author and former head of cannabinoid-related research projects at the National Institute on Drug Abuse, said in a statement.

“If someone is driving impaired, by the time you get their blood sample, you’ve lost 90 percent or more of the drug. So, we have to change what we do at the roadside,” she said.

Some tests already in use

Huestis would like to see further refinement of tests that rely on analyzing suspects’ behavior as well as the development of marijuana-specific breathalyzers and other new ways of detecting impairment.

Some of those methods are already in use.

In Colorado, the first state to legalize marijuana use, the Colorado State Patrol (CSP) includes specialized drug recognition officers. Any driver arrested after a trooper observes signs of impairment is given a blood test.

“When driving a motor vehicle in Colorado, any driver has given their consent to submitting to a chemical test if they are presumed to be under the influence of drugs or alcohol,” Sgt. Rob Madden, a CSP representative, told Healthline. “Drivers can refuse a test, but that leads to an immediate revocation of their driving privileges.”

Madden also noted that the CSP is entering the final phase of testing of new “oral fluid” devices.

California, where the recreational use of pot became legal on January 1, also has specialized drug recognition officers and rules stipulating drivers arrested for driving under the influence are required to take a blood test if marijuana is the suspected intoxicant.

That suspicion is formed during a 12-step roadside evaluation process that includes some familiar elements — walking in a straight line, standing on one foot, touching fingers to nose — as well as checking pulse rates at three different points in the process and checking pupil size in ambient light, near total darkness, and direct light.

Based on their observations, officers then “render an opinion on what they’re under the influence of in which of the seven categories of drugs, or a combination of them,” Oscar Chavez, a California Highway Patrol (CHP) officer who trains other officers in drug recognition, told Healthline.

The suspect then takes a blood test, which is analyzed by a crime lab. Lt. Eric Jones of the CHP called the blood test the “gold standard.”

“When you use cannabis, there’s certain metabolites that appear in your blood, and some of those can linger… but the ones that are associated with impairment spike pretty quickly, so blood tests work pretty well” in determining if someone is impaired while driving, he said.

Problems with the tests 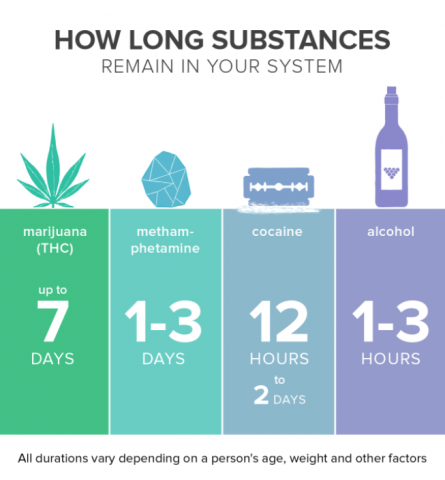 Researchers, however, cite several problems with relying on these tests.

THC also builds up in the fat tissue of frequent users and can slowly spread into the blood from there.

Consequently, plasma and blood predictive models weren’t considered reliable in determining time of last use in chronic frequent cannabis users, according to the new paper.

Compare that to alcohol. Alcohol is metabolized on average at 20 milligrams per deciliter per hour. That rate can vary depending on age, weight, liver health, and recent meals, but there is a consistent relationship between a given blood alcohol concentration and impairment.

But as marijuana becomes more widely available, more reliable tests may be needed.

That will likely include oral fluid tests, which analyze saliva for marijuana and its metabolites.

For oral fluids, there is an accepted concentration of THC associated with ingesting cannabis in the previous 24 hours, even for frequent users, according to the new paper. That measurement is 2 milligrams per liter.

“We haven’t deployed them yet, but we are looking into them. They’re probably the new forefront of drug-impaired driving right now,” he said.

In Colorado, a pilot testing of oral fluid devices is under way, according to Madden. That test is in its final phase.

An investigation by the Denver Post last year found the number of drivers in fatal crashes who have tested positive for marijuana has more than doubled since legalization in Colorado in 2013.

However, given the limitations of testing for impairment, not all of those drivers were necessarily high at the time of the crashes.

In California, it’s too soon to tell whether there has been any spike, said CHP spokeswoman Fran Clader.

“It’s clearly a concern we have,” Clader told Healthline.