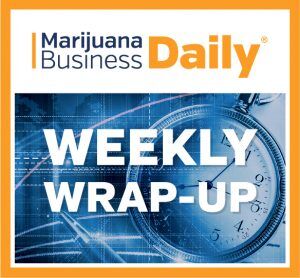 The recent revelation by liquor distributor Pernod Ricard’s CEO that alcohol companies are eyeing the cannabis sector offers a glimpse into what’s coming for the U.S. marijuana industry, according to one industry analyst.

“Many of us in the industry have always said long term there’s going to be big players that come in and try to take over the industry,” said Jeffrey Zucker, president of Green Lion Partners, a Denver-based cannabis consultancy.

“We’re starting to see the first steps of that take place.”

His statement is bolstered by the news that tobacco company Alliance One International has purchased stakes in two Canadian cannabis companies and a U.S.-based hemp operation.

What struck Zucker about that deal was that Alliance One took controlling interest in the Canadian firms.

“They’re really going to put their management stamp on it,” he added. “We’re now going to see a tobacco company running a cannabis company.

Zucker suggests a cautious approach for cannabis business owners who might be hoping to draw a similar investment.

“As appealing as those investment dollars might be, (larger companies) can be very cutthroat,” he said.

“Make sure that you don’t give away more control than you want to.”

But for owners who do decide to court such investments, the focus should be on maintaining compliance, according to Zucker.

“It’s important that your business is operated in a very sound manner – that you have clean books and a good structure to your organization,” he added.

Those companies, if based in the United States, also need to exercise patience.

“I do think it’s going to take some time and changes at the federal level before you’re going to see investment from these larger companies,” Zucker said.

Detroit’s cannabis entrepreneurs have been fighting the proverbial system for years, most recently a city moratorium on medical marijuana licenses.

“It’s very hard to give advice to clients,” he said, “and clients are very frustrated because they’ve been shortchanged by the process, which keeps changing.

“… It’s hard to plan, it’s hard to operate, it’s even hard to advise as an attorney.”

Detroit dispensaries’ legal situation has been in flux for over a year, and there are few answers for companies hoping to play by the rules, Schroder said.

The issue dates back two years, when the city approved a pair of zoning ordinances that effectively closed most of the dispensaries within Detroit’s boundaries.

But in 2017, Detroit voters gave a thumbs-up to two ballot initiatives that overrode those ordinances and seemed to pave the way for a much larger MMJ industry.

However, city officials decided against implementing the voter-approved laws.

So Schroder filed suit against the city on behalf of the dispensaries – and won. Sort of.

In its Feb. 9 ruling, the Michigan Court of Appeals said Detroit was breaking the law by not accepting MMJ business license applications.

And that created a logistical problem:

“The judge is going to decide if these ordinances are valid a day after the applications are due to the state,” Schroder said.

“Our argument is that the new ordinance gives them a right to stay open. So there’s this time crunch.”

The upshot, he added, is Detroit’s medical marijuana businesses “have to wait for the dust to settle.”

Just as a landmark cannabidiol lawsuit headed to court this week, police in Tennessee carried out the largest known CBD raids in history: 23 businesses were closed and 21 individuals were cited for selling illegal marijuana products.

The raids didn’t sweep up any producers or processors, but they put the fledgling hemp industry in Tennessee on notice.

Like other states, Tennessee allows hemp growing and CBD production and has a small but thriving extraction industry.

But CBD possession in the Volunteer State is limited to those with certain medical conditions.

“You bet this is going to spark a few bills” in the state legislature, said Harold Jarboe, a Tennessee hemp grower who wasn’t affected by the raids.

“Tennessee has one of those ‘wink-wink, nudge-nudge’ CBD laws, so hopefully this will change that.”

Until CBD’s legal status is clarified, Jarboe said, the hemp industry needs to avoid looking like it’s trying to appeal to children and maybe avoid even using the letters C-B-D.

“We’re trying to make a health product, so we don’t do vapes, we don’t do candy,” Jarboe said. “We call it ‘hemp extract.’ It saves a lot of headaches.”