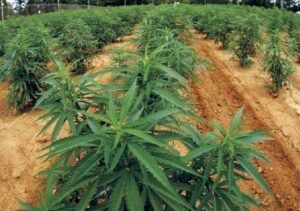 You are here: Home / Policy & Legal / California / This Rural County In California Legalized Marijuana Farms Then Banned Them After Taking Their Tax Money

Dennis Mills peered over his shoulder at the green hills below, where marijuana farms dotted the Calaveras County landscape.

“There’s another one!” he told the pilot with a laugh. The Cessna doubled back so Mills, a county supervisor, could steal a second look at a slope where trees had recently been removed.

From above, Mills said, it’s impossible to tell which cannabis cultivation sites are legal. But it didn’t matter to him. Every single one has to go.

Marijuana growers poured into this county known for gold mines and Mark Twain’s short story “The Celebrated Jumping Frog of Calaveras County,” hoping for a green rush after recreational cannabis was legalized in 2016. That pot boom ended abruptly when the Calaveras County Board of Supervisors voted to ban all commercial cultivation last month.

The debate here reflects a different side of the mania that has swept the state since the sale of recreational marijuana rolled out in January. As some places move to position themselves as pot havens, more conservative counties have decided they want nothing to do with cannabis — either selling it or growing it.