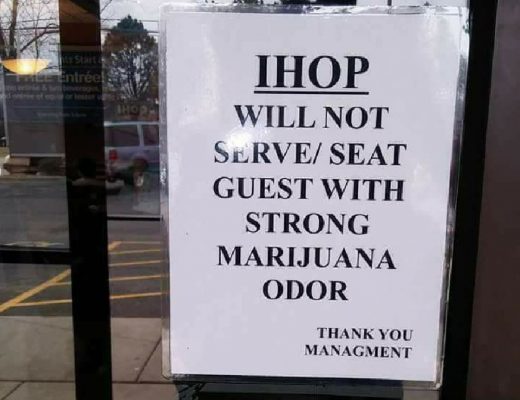 A photo that’s gone viral this week claims to show an IHOP restaurant in St. Louis, Missouri with a sign on its door that warns diners it will not serve or seat guests who smell of marijuana.

In fact, the photo is over a year old and the restaurant welcomes all guests “without judgement, an IHOP spokesperson tells The Cannabist.

“IHOP will not serve/seat guest with strong marijuana odor. Thank you, Managment”

The photo was posted on Facebook by Matthew Porter III on March 6. It proceeded to go viral with over 13,000 shares, and was picked up by Merry Jane as well as a massive Reddit feed. The photo has since been deleted from Reddit.

The sign was actually posted by one franchised restaurant in St. Louis over a year ago, IHOP spokesperson Stephanie Peterson said via email. The IHOP at 10910 New Halls Ferry Road, St. Louis, removed the sign almost immediately.

“I’m sure at the time someone at the restaurant had good intentions and was likely trying to honor a guest request,” she said. “This is not system-wide or a policy and is outdated signage. The brand and our franchisees are all about welcoming guests in without judgement.”