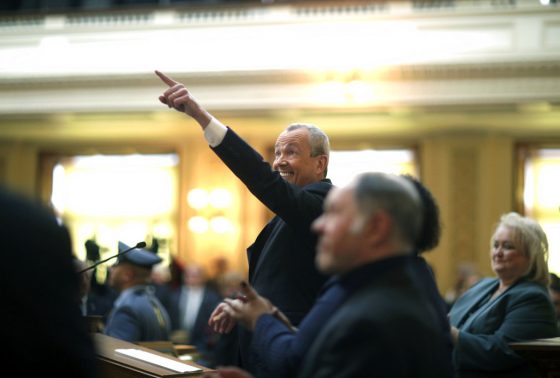 TRENTON, N.J. — Gov. Phil Murphy looked to four states with legalized recreational marijuana as a guide for calculating the $60 million in new tax money legalization could bring into New Jersey.

Treasury officials say they examined revenues for the first year of legalized recreational cannabis from Colorado, Nevada, Oregon and Washington and considered those states’ populations as compared to New Jersey’s and arrived at the $60 million figure.

“We examined other states that already have a legalized mechanism in place and took a conservative estimate based on the revenue they generated in Year One of legalization, keeping in mind that there are differences in the various tax mechanisms and the size and nature of these markets,” said Treasury spokeswoman Jennifer Sciortino.

The estimate is far below the $300 million in revenue Murphy estimated on the campaign trail and that liberal-leaning groups, such as New Jersey Policy Perspective, also endorsed.

Policy Perspective director of government and public affairs Brandon McKoy said the administration was right to take a conservative estimate and that including the figure in the budget amounted to the administration “planting a flag” to show it intends to push for legalization.

But the effort appears to be moving slowly in the Legislature, and Republicans say they view that as a sign legalization doesn’t have enough support to pass the Democrat-led Legislature.

“A number of legislators remain opposed, which would turn that $60 million into a zero,” said Republican Assemblyman Brian Rumpf, who opposes legalization and sits on the oversight committee that is considering the issue.

Democrats say it’s important to adopt a deliberative approach. Democratic Assemblyman and oversight committee chairman Joe Danielsen is holding hearings across the state on the issue and cautioned that it’s too early for legislators to have made up their minds.

Bill Caruso, an attorney and a former Democratic legislative aide, is on the steering committee of New Jersey United for Marijuana, which supports legalization. He said he views the governor’s estimate as a sign that legalization is a priority and moving forward despite a slow pace.

“I think we’re marching toward an inevitability,” he said.

Murphy has said he backs legalization on “social justice” grounds, specifically over concerns that poor people of color suffer disproportionately from cannabis being illegal.

But he also is relying on the revenue to help fund other promises, such as higher pension payments and school aid.

Lawmakers and Murphy have until June 30 to enact a balanced budget.