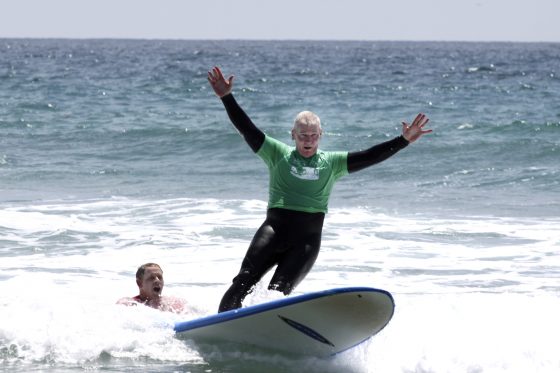 In song and prose, surfing has long been celebrated as a way to soothe the mind and invigorate the body. But scientific evidence has been limited.

Now the Navy has embarked on a $1 million research project to determine whether surfing has therapeutic value, especially for military personnel with post-traumatic stress disorder, depression or sleep problems.

Researchers say surfing offers great promise as therapy. It is a challenging exercise in an outdoor environment; people surf individually or in groups; military surfers who are reluctant to attend traditional group therapy open up about their common experiences when talking to other surfers on the beach.

“Lots of times it becomes therapy under the guise of recreation,” said Helen Metzger, head of the health and wellness department at Naval Medical Center San Diego. “They talk about surfing and then it gets into things that are deeper than that, common experiences, common traumas.”

“For many of our patients, exercise is the best medicine, and exercise in the natural environment is even better,” said James LaMar II, a physician at the Naval Medical Center San Diego and a volunteer in the hospital’s surfing program. “Surfing is a way back to a healthy life, the kind of life they had before they were traumatized.”

The military saw a 65 percent increase in mental-health diagnoses among active-duty personnel between 2001 and 2011, according to a 2013 study done by the Congressional Research Service. Cases of PTSD increased by 650 percent, according to the study, and more than 900,000 individuals were diagnosed with at least one mental disorder during that decade.

The Navy study, led by clinical psychologist Kristen Walter, analyzes questionnaires answered by service members before, during and after a program of surfing one day a week for six weeks.

The first group of 14 active-duty Marines and sailors in the six-week surfing program all had shown signs of major depressive disorder, some with signs of PTSD, researchers said.

To the researchers, the initial results suggest that surfing can lead to a decrease in insomnia and feelings of anxiety, and a decline in an overall negative view of life and other symptoms of depression.

The study, which began last year, will follow up with participants to check on their sleeping patterns and whether improvements in their mental outlook have been long-lasting.

The study also plans to test the hypothesis that while hiking is beneficial, surfing is even more so. While some patients will go surfing, others will be taken on hikes.

When the three-year study is complete, there will have been 118 participants in surfing groups and 43 in hiking groups.

For physicians who have treated service members, the initial upbeat results are not surprising.

“It’s huge that Navy medicine is thinking outside the box,” said Betty Michalewicz-Kragh, an exercise physiologist at the hospital and director of the surfing program.

Physicians in the military medical system and the Department of Veterans Affairs are hoping the study will prove that surfing is therapy, not just recreation.

“We all know it’s good; we can see it,” said Capt. Eric Stedje-Larsen, a pain management specialist who worked in the San Diego surfing program before being assigned to the Navy hospital in Portsmouth, Va. “For some folks, there is nothing like it. But we need science to get the administrators onboard.”

The surfing program at the Naval Medical Center San Diego began in 2008 when therapists were helping an Army staff sergeant from Hawaii whose right leg and right hand were blown off in Iraq. He asked whether he would ever surf again. Therapists took him surfing and, over time, were impressed as he regained strength and self-confidence. A second patient, a Coast Guard seaman whose leg was amputated in a motorcycle accident, joined the soldier. Soon a surfing program was created for other amputees and then for patients with mental-health problems.

The idea that surfing can relieve the trauma of war is not new. An expansive exhibit at the California Surf Museum in Oceanside, close to Marine Corps Base Camp Pendleton, is titled “China Beach: Surfing During the Vietnam War and the Healing Power of Wave-riding.”

Related: American Legion calls on Trump to take cannabis off Schedule I to help vets with PTSD

“It’s peaceful, but it’s also an adrenaline rush,” said retired Lt. Gen. John Toolan, who led combat troops in Iraq and Afghanistan. “Surfing is great therapy for young guys and for old guys like me, too.”

A surfing program by the Los Angeles-based Jimmy Miller Foundation brings instructors and psychologist Kevin Sousa to Camp Pendleton twice a month. Sousa follows service members with physical and mental injuries into the waves to offer surfing instruction and look for signs of emotional problems or distress. When the surfing session is over, he helps lead an informal group discussion on the beach.

“We believe we can heal each other one wave at a time,” said Kris Primacio, manager for ocean therapy at the foundation.

The foundation, along with VA Greater Los Angeles Healthcare System, supported an early study of the therapeutic value of surfing. Led by occupational therapist Carly Rogers, the 2014 study found that surfing, coupled with individual counseling, group therapy, other exercise programs and medication, can help alleviate symptoms of psychological distress.

Jonathan Sherin, director of Los Angeles County’s mental health department, was a physician with VA during the Rogers study.

“Surfing exposes individuals to the awe of nature,” he said. “It’s good for a population that has turned inward from people and the outside world.”

On a recent sunny day, service members, many of them from the Wounded Warrior Battalion, assembled on the beach at Camp Pendleton to listen to instructors from the Jimmy Miller Foundation.

One of the surfers was Sgt. Maj. Brian Fogarty, a veteran of Iraq and Afghanistan. While Fogarty surfed, his PTSD service dog Blade, a 2-year-old boxer, stayed on the beach and watched. Fogarty will retire soon and join the PTSD Foundation of America. He plans to sing the praises of surfing.

On most days, military members can be found on several beaches in the San Diego area.

Nick Horin, 36, an Army staff sergeant and Iraq combat veteran, lives in the Aspire Center, a VA residential rehabilitation treatment site. He has been diagnosed with PTSD.

“I had a lot of anger after Iraq; I wanted to hurt people,” Horin said at a beach in La Jolla. “Surfing is the only way to take the edge off my anger without drinking or taking drugs.”

A few days later, the latest participants in the San Diego hospital’s surfing program and the study met at the beach in Del Mar.

Marine Cpl. Angel Lopez, 21, was severely injured in a motorcycle accident. “I can’t ride anymore, but maybe I can surf,” he said. “This is another step to keep going.”

One of the volunteers at Del Mar was Nico Marcolongo, a retired Marine major. Surfing, he said, helped him overcome PTSD after Iraq. He is convinced it will help others.

“Overcoming a challenge gives them a sense of empowerment,” Marcolongo said. “They stop thinking of their injuries and start thinking about the waves.”