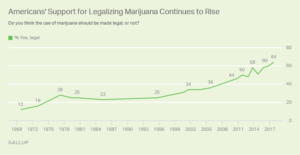 The 64% of Americans who say cannabis should be legal in a new Gallup poll released on Wednesday represents the highest level of support in the organization’s 48 years of polling on the topic.

The new survey also shows that a majority of Republicans — 51% — support legalization for the first time. Seventy-two percent of Democrats and 67% of independents are on board.

Gallup been asking the same question — “Do you think the use of marijuana should be made legal, or not? — since 1969. That year, only 12% of Americans backed legalization.

It makes sense that support for ending marijuana prohibition is increasing. Americans are tired of wasting resources arresting hundreds of thousands of individuals every year for using a substance that is safer than alcohol. In the five years since the first states made marijuana legal for adults, it has become increasingly clear that — unlike prohibition — regulation works. Adult-use marijuana laws create jobs, generate tax revenue, and protect consumers while taking the marijuana market out of the hands of criminals.

As public support for ending marijuana prohibition continues to grow, it is crucial that states continue to be given the freedom to serve as laboratories of democracy. We urge the Department of Justice in particular to continue its policy of not interfering in states with well-regulated adult-use and medical marijuana programs while lawmakers catch up to the will of the people.