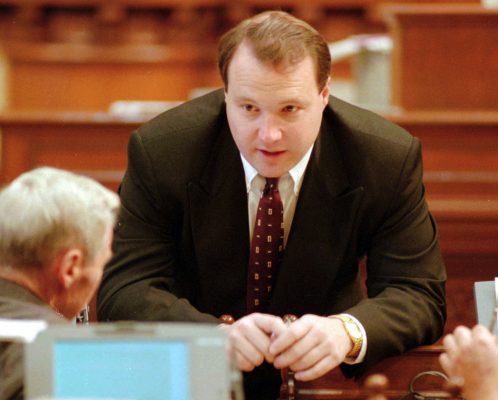 SANTA ANA, Calif. (AP) — A well-known Republican on Friday filed papers to join a crowded field attempting to oust longtime GOP Congressman Dana Rohrabacher from his seat, one of four in and around Orange County that Democrats have targeted as they try to regain the House.

Baugh is one of 16 candidates for the seat, including eight Democrats and six Republicans, county Registrar of Voters Neal Kelley said.

California’s 48th Congressional District includes Huntington Beach and other coastal cities. Rohrabacher has represented the area in Congress for 29 years.

Orange County once was a GOP stronghold but Democrats have gained significant ground and now have their eyes on four GOP seats, including one held by retiring Congressman Darrell Issa. Hillary Clinton narrowly carried Rohrabacher’s district in 2016 but he still won by 16 percentage points.

In California, the top two vote-getters in the June primary will proceed to the midterm elections in November.

That means two candidates from the same political party can wind up competing against each other in the general election and some in Southern California suggest Baugh’s candidacy might drive Democrats out of the race.

“Certainly, that is always better than a Republican and a Democrat,” said Fred Whitaker, chairman of the county’s Republican Party. “But you know, if Congressman Rohrabacher and Chairman Baugh end up spending lots of their money hitting each other, that does nothing but weaken both of them.”

Whitaker said he believes the party should instead focus efforts on retaining the two seats in the county that are being vacated by Issa and Ed Royce. The other seat in play is held by Republican Mimi Walters.

Rachel Potucek, a spokeswoman for the Democratic Party of Orange County, said the party knew Baugh could join the race at the last moment since he has already amassed sufficient funds to mount a campaign. She said the party has been urging Democratic candidates to think hard about whether running is the right move.

“The math matters and is important to these races,” she said. “We’ve asked candidates to be objective and do what is best for our country and step aside if they need to unify the vote

Rohrabacher, once a speechwriter for President Ronald Reagan, has been a supporter of Russia and its leader, Vladimir Putin. His name has come up in the investigation into Russian meddling in the 2016 election and he has denied any wrongdoing.