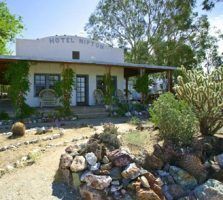 Arizona-based American Green’s goal of transforming a California ghost town into the “Epcot Center” of marijuana has run into serious turbulence.

The company issued a news release revealing that it had sold its holdings in the California border town of Nipton to Delta International Oil & Gas for “consideration totaling more than $7.73 million.”

American Green agreed last year to buy the town for $5 million and planned to turn it into a cannabis tourism mecca.

Nipton is about a one-hour drive from the Las Vegas Strip and four hours from Los Angeles.

Under terms of the sale to Delta, American Green will supposedly continue to “manage Nipton and associated projects for five years,” according to the release.

Delta, meanwhile, will assume $3.73 million in American Green debt, according to New Cannabis Ventures, which first reported the news.

American Green Chairman David Gwyther said in the release that the deal will “relieve American Green of the ongoing expense of improving Nipton.

“That responsibility will now fall upon Delta, giving Nipton the ability to access cheaper capital.”

But New Cannabis Venture’s longtime marijuana stock-watcher, Alan Brochstein, is still skeptical the Nipton plan will ever come to fruition.

He concluded that “investors should continue to steer clear of the company.”