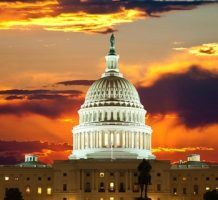 The only federal law formally preventing the U.S. Department of Justice from prosecuting medical marijuana businesses has once more been given a new lease on life.

This time, the Rohrabacher-Blumenauer Amendment – formerly known as Rohrabacher-Farr – has been extended until March 23 under the budget deal passed by Congress and signed Friday morning by President Donald Trump.

This is the eighth time the amendment has been temporarily extended by a continuing resolution from Congress, which hasn’t passed a new federal budget since 2015.

Rohrabacher-Blumenauer prohibits the DOJ from using federal funds to interfere with state-legal MMJ laws and companies.

The measure does not protect recreational marijuana businesses.

Because Rohrabacher-Blumenauer has been approved in the past only as an amendment to the federal budget, the law’s lifespan is tied to annual renewal by Congress.

The GOP-controlled Congress has not approved a new budget since 2015, instead having repeatedly delayed negotiations over a longer-term budget until recently, so the longer-term fate of the amendment is still uncertain.

It’s possible the amendment will be included in a larger spending package that is expected to be approved by March 23.

But there’s no guarantee at this point, given a change in procedural rules in the House of Representatives last year that has prevented amendments like Rohrabacher-Blumenauer from being added to the budget.

A glimmer of hope came from the Senate Appropriations Committee last year, however, when Vermont Sen. Patrick Leahy got the amendment added to a Senate version of the spending bill.

Proponents of the amendment note that it has overwhelming popular support in the House as well.